3 people dead, 1 other injured after bluff collapses at Grandview Surf Beach in Encinitas 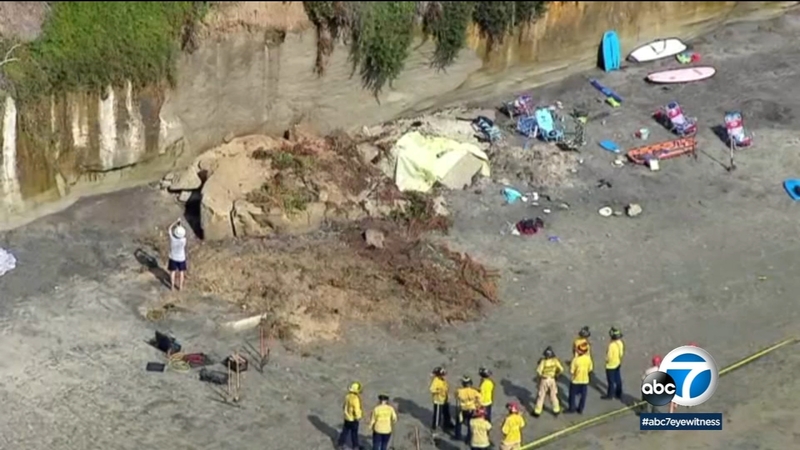 3 dead, 1 other injured after bluff collapses at Encinitas beach

SAN DIEGO (KABC) -- Three people are dead and two others were injured in a bluff collapse just north of Grandview Surf Beach in Encinitas, the San Diego County Sheriff's Department has confirmed.

The bluff fell onto a group of beachgoers at 3 p.m. north of the Grandview Beach staircase, just below South Ponto State Beach. The nearest intersection is 1700 Neptune Ave., deputies said. The chunk of cliff that collapsed is about the size of a bus, geologist Dr. Pat Abbott told ABC affiliate KGTV.

The City has confirmed that two of the three victims that were transported to local area hospitals earlier today have succumbed to their injuries. This brings the total fatalities from this incident to three. Beachgoers should continue to use caution when visiting beach areas. pic.twitter.com/sTQdhQZIKh

City officials have closed the beach from Ponto Beach in Carlsbad to the area south of Grandview Beach and are asking that the public avoid the affected area.

"We are devastated by the tragedy today and our hearts go out to the victims and their families. We stand ready to help in any way possible. Our engineers and the public safety team are diligently working to assess bluff conditions," Encinitas Mayor Catherine Blakespear said.

The city's geotechnical engineer has confirmed that the homes above the bluff do not currently appear to be at risk. They advised beachgoers should avoid areas near or under the bluffs and keep 25 to 40 feet away.