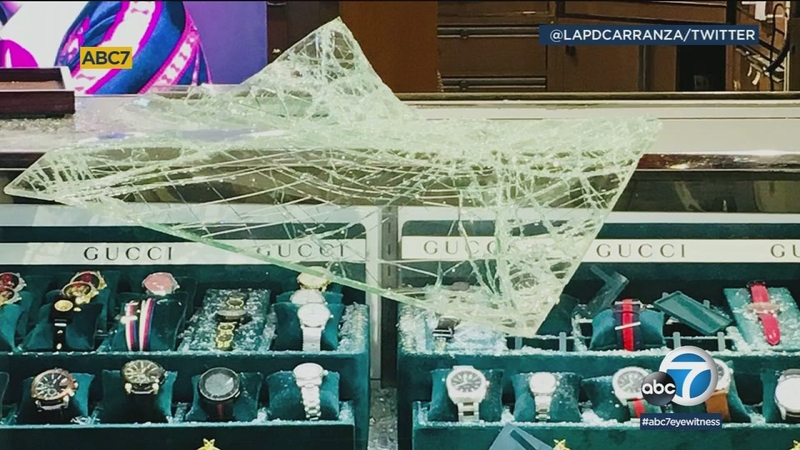 The smash-and-grab incident was reported shortly after 10:25 a.m. at Westfield Fashion Square in the 14000 block of Riverside Drive, according to the Los Angeles Police Department.

Two male suspects took merchandise from display cases on the second floor of a Macy's department store and then fled in a light-colored vehicle, LAPD investigators said. It was unclear what the robbers were armed with.

Initial reports that shots were fired were unfounded, police said, adding that the sound of shattering glass may have been misinterpreted as gunshots.

A police photo from the crime scene showed a damaged display case with luxury watches inside. The value of the stolen merchandise was unknown.

One eyewitness who was inside the Macy's at the time of the robbery said the loud sound triggered "pandemonium" inside the retail store.

"We heard a big bang noise and there's a guy with a hammer, banging, I think, one of the watch counters," the man said. "And then basically someone went towards him and he pulled out what looked like a gun."

Detailed descriptions of the robbers and the getaway vehicle were not immediately available. Police said they are reviewing surveillance video from the mall's security cameras.