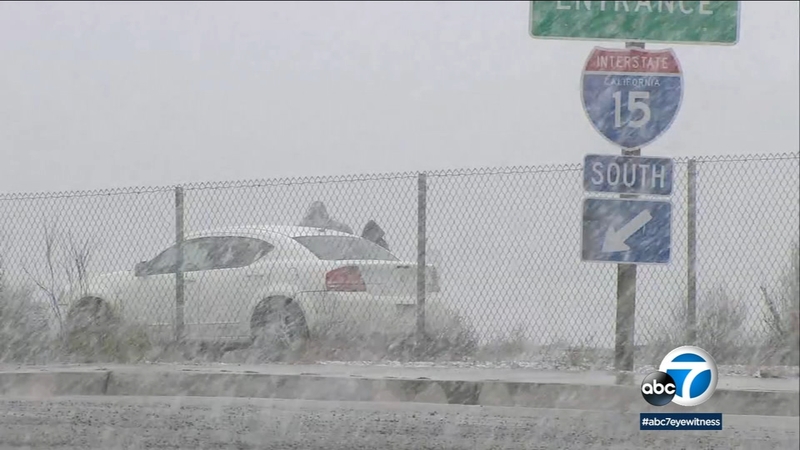 The districts that closed their campuses included: Bear Valley, Morongo, Snowline and Rim of the World.

When classes would resume was not immediately announced.
Meanwhile, drivers in the Cajon Pass were contending with intermittent snow flurries and icy conditions, the heaviest snow dropping in the late afternoon.

Caltrans crews cleared the 15 Freeway after the storm dumped snow on the heavily trafficked stretch of the interstate. The morning commute was not significantly affected.

The snow came down the hardest at the top of the pass with reduced visibility.

Snow blanketed communities near the mountains in the Inland Empire on Thursday.

In Forest Falls, several inches of snow buried driveways. Several avalanches on Highway 38 shut down the route to Big Bear to the disappointment of drivers stopped at the road closure.

From rain to sleet and snow, Caltrans crews were hard at work trying to keep the roads open throughout the day.

"We have chain control on 330 at Highland Avenue, which is unheard of. We're getting hit really hard in the Cajon Pass right now in Devore. We're also getting hit at Mountain Pass on I-15 and stateline," said Terri Kasinga of Caltrans.

The winter storm dropped snow levels to the lowest seen in years -- all to the delight of many drivers.

"It's just really crazy 'cause, being from Vegas, it hasn't snowed since I was 9 years old," said Las Vegas native Steven Birch. He said he had "driven through here like hundreds of times and never seen it snow here. It's just, it's wild."

Classes continued as scheduled in the Apple Valley Unified School District, which warned that school buses might experience delays.

All schools in our district will be open today. Please use caution when traveling to and from school. There may be transportation delays for bus routes traveling to "The Marianas" and servicing Apple Valley HS and Mariana Academy. Please visit https://t.co/hLpR4Qvurc for updates.