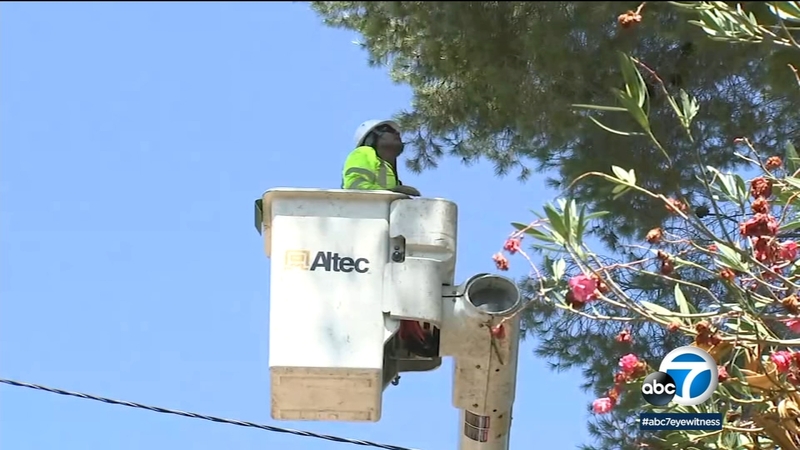 HACIENDA HEIGHTS, Calif. (KABC) -- The Holy Fire in the Inland Empire and the Woolsey Fire near Malibu are just a few wildfires that rocked Southern California last year, and now SoCal Edison is trying to mitigate those fire worries with Operation Santa Ana.

Operation Santa Ana will examine 900,000 trees across 50,000 acres of SoCal Edison's service area that are considered to be a high risk threat to wildfires, however, a rainy start to 2019 decreased the wildfire risk and is instead giving SoCal Edison workers a different problem to cut through.

"It has created greater growth in the trees, so the amount of foliage that we are removing from the trees is greater than in the past, but as far as what we do it's the same thing, patrol year round and mitigate year round," said David Guzman, SCE Vegetation Manager.

It is a good lesson for homeowners.

"A lot of greenery on the property, you know just keep your plants clean, make sure there's not too much dry stuff around it," said homeowner Samuel Arellano.

"When we get better clearances from the power lines, from the vegetation to the power lines, you have a safer chance that if a branch were to fall, it would not fall on the lines, cause a spark and probably start a fire," Guzman said.
Report a correction or typo
Related topics:
wildfirefirefighters
Copyright © 2021 KABC-TV. All Rights Reserved.
TOP STORIES
18-month-old in stroller dies in North Hills crash
Hollywood union calls off strike, for now
NLCS: Dodgers fall behind 0-2 in series after loss to Braves
Supervisors call for investigation into Ridley-Thomas charges
CHP holds graduation ceremony for K-9 teams
NLCS Game 2: Justin Turner scratched with neck injury for Dodgers
Bill Clinton released from UCI Medical Center after blood infection
Show More
LA County wants Vanessa Bryant to take psychiatric exam before trial
Coast Guard: Ship owner, operator of interest in OC oil spill
10-year-old boy says father 'drowned him a lot,' court records show
US religious group says 17 missionaries kidnapped in Haiti
Masks and vaccines are a must this holiday season, CDC says
More TOP STORIES News