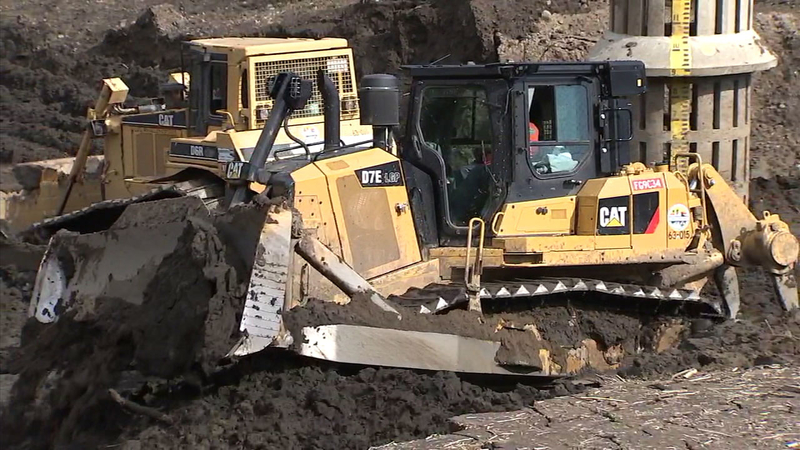 DUARTE, Calif. (KABC) -- Mandatory evacuation orders were issued for parts of Duarte as crews prepare for a massive storm expected to hit the region Friday.

Residents of 180 homes in the Fish Fire impact area were ordered to evacuate by 7 a.m. Friday.

An evacuation center was being established at the Duarte City Hall Community Center, 1600 Huntington Dr. The impact of the coming rain was predicted to be even stronger than the storms last month that caused flash flooding throughout Southern California.

City officials said they have been warned to expect an inch of rain an hour to fall, with wind gusts up to 70 mph. The city is moving to Red Alert Level in the Fish Fire impact area starting at 7 a.m. Friday, in anticipation of heavy mudflows on hillsides scarred by the wildfire.

More information about the Duarte evacuation is available here.

Crews were scrambling to clean out debris basins at the base of the foothills in Duarte before the monster storm hits. The Los Angeles County Department of Public Works worked at a feverish pace to complete the job before the heavy rain pours into the region on Friday.

"In the interest of safety, of property and the residents of this community, we're attempting to get this material out before the next storm hits. That's why we've had a 24-hour operation here," Bob Spence of the Department of Public Works said.

The Fish Fire of 2016 scorched the foothills throughout parts of the San Gabriel Valley, leaving communities like Duarte vulnerable to mud and debris flow during heavy rain.

The main defense against rivers of mud and debris slamming into homes are debris basins at the foothills.

"We have about 175 debris basins strategically placed throughout the foothills," Spence explained. "These debris basins represent our first line of defense when it comes to debris, mud flow and mudslides. The increase of that is heightened after we've had wildfires like the Fish Fire."

Ahead of the storm, the city of Glendora declared a yellow alert for residents near the Colby Fire burn area.

Residents in the area must move vehicles, trash bins and other objects from streets to allow access for emergency vehicles, and to prevent them from being washed away by possible flooding.

In Ventura County, officials urged residents to re-check gutters, property drains, and remove leaves or other debris while it was still dry. They also urged people to have fresh batteries in flashlights, re-stock emergency supplies, and obtain sandbags if their property is prone to flooding.

Residents in Ventura county were prepping for a monster storm expected to hit the region.

Authorities warned the homeless population with encampments along the Los Angeles River that they may be in danger if they stay.

"Some are receptive, some are not, but you never know. That's why we offer help, and sometimes you might get that 'yes,' and then we can tie that person in with services available," Justin Verga with the Long Beach Fire Department said.