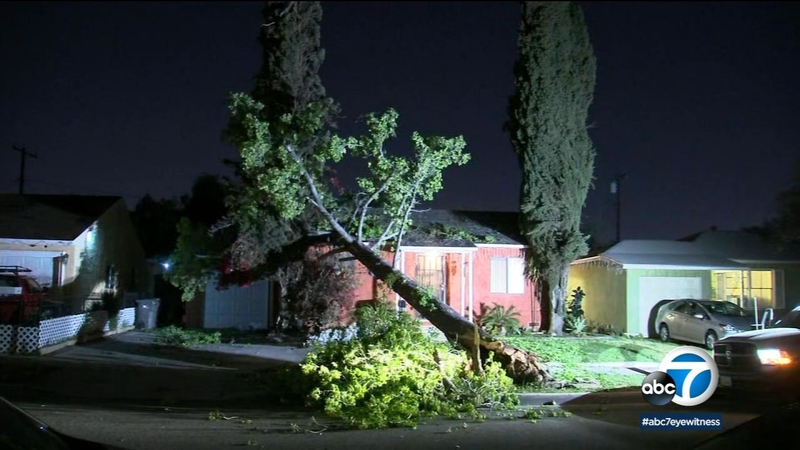 Power outages were reported in parts of Los Angeles, including Los Feliz, Mid-Wilshire, Koreatown, Arlington Heights and Fairfax district areas to name a few. Crews were working on repairs and restoring service, according to the Department of Water and Power.

The LADWP at one point said approximately 35,000 customers were without power. Southern California Edison said the wind storm event caused 532 outages that impacted roughly 16,000 customers across its service territory.

Trees were also falling down on cars, including more than one law enforcement vehicle. LAPD officers said a tree fell onto a cruiser in the Mar Vista area.

In the Cerritos area, Los Angeles County sheriff's deputies reported a large tree falling onto a patrol vehicle in front of the station. No injuries were reported, but the windshield was broken.

High winds toppled a tree onto patrol vehicle in front of station ⁦@CERLASD⁩. Thankfully nobody injured. Just a broken windshield.

Another tree fell onto the westbound lanes of the 10 Freeway just east of Crenshaw Boulevard. California Highway Patrol officers had to block lanes, causing a traffic backup.

In Mid-City, the wind knocked down a huge tree and sent it crashing onto a white Dodge Ram pickup on West Boulevard at 17th Street. A power outage was in the neighborhood as well.

In Baldwin Park, a large 50-foot liquidambar tree fell on top of a home in the 14000 block of Benbow Street. Tomas Clemente and his wife were home at the time but not injured.

Their neighbor watched as the tree toppled over.

"It had a big crunch, like as if you were to crunch a water bottle," said neighbor Melanie Valle.

The mayor stopped by to inspect the damage. Neighbors said the tree, owned by the city, has been leaning for a while.

"We do inspect the trees. From my understanding, this was previously reported. I will be looking into that as well," said Mayor Manuel Lozano.

A crane was expected to be brought into the neighborhood to remove the tree.