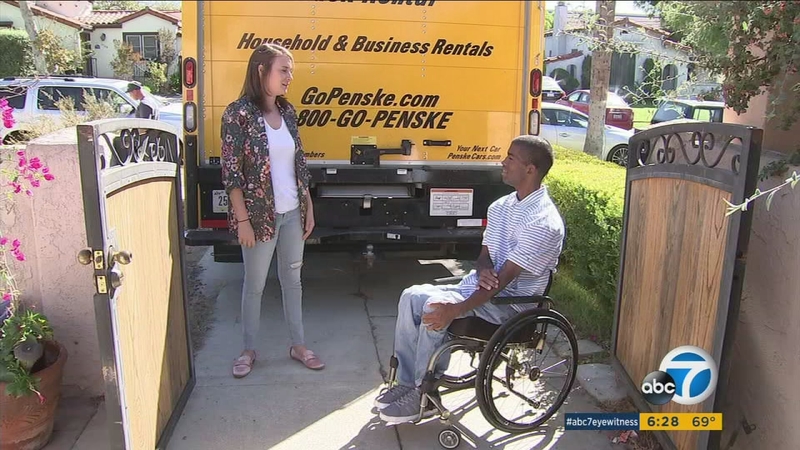 LOS ANGELES (KABC) -- It was a day of transformation for the team at Furnishing Hope, a nonprofit that helps wounded veterans.

"Furnishing Hope believes that the condition of the home has an influence on the happiness and productivity of everyone in that home. Healing starts at home," she said.

Their mission: Giving back to Army Sgt. Felipe Adams. In 2006, Adams was on patrol in Baghdad, when suddenly his platoon got ambushed. A sniper's bullet hit his spine, paralyzing him.

"It was a typical patrol, then we came under fire. The platoon got ambushed. I took a round to the side and fell to the ground - yelled out I was hit. Next thing I know, I woke up and I was in Germany, in the hospital," Adams said.

Phillips said part of what motivates them is being able to help those who have sacrificed so much.

"He's given up his regular life for what he did for his country," she said.

Adams, who lives in Los Angeles with his wife and extended family, said they were in desperate need of furniture.

That's where Furnishing Hope came in. They get donations from furniture companies, and other sponsors, and partner up with veterans in need.

Phillips said some of the pieces were donated by Living Spaces.

"We have wonderful, generous sponsors," she said.

For their project, they brought in designer Julia Newman from Julia Adele Design. Newman said she wanted to make the space really special and was given almost free range from Adams.

"I always try to think of colors and how it impacts peoples' mood. So, if someone's coming out of a dark time, it's always nice to have brighter colors and kind of add some flair to the house", she said.

The team got to work, putting up new drapes and setting up tables and chairs. They also arranged accessories for a finishing touch and displayed the family's own photos in new frames as they redecorated.

When Adams was welcomed back into his home for the big "reveal," he was amazed by all the dramatic changes.

"It looks like a totally different room" he said, as he surveyed the dining room.

He immediately noticed the brand new couch with a modern print as he went into the living room. Adams said he loved how sharp it looked, "like it's just out of a style magazine."

But his favorite piece was the coffee table. Newman said when she picked it out, she thought about how Adams used a wheelchair and how the table was adaptive. She explained that the table top can be lifted up and how the height is adjustable.

Adams was thrilled at the prospect of being able to eat while he sat on his brand new couch.

"Wow. This is awesome! I know where I'm going to have dinner tonight," he said.

Newman, Phillips and the whole team at Furnishing Hope, were just happy that Adams was so pleased with his new furniture.

Over the years, the nonprofit has helped more than 350 veterans, and this year they're aiming to furnish 55 homes.

Adams said he still can't believe he was selected. The generosity and acknowledgement of his sacrifice is still a little overwhelming.