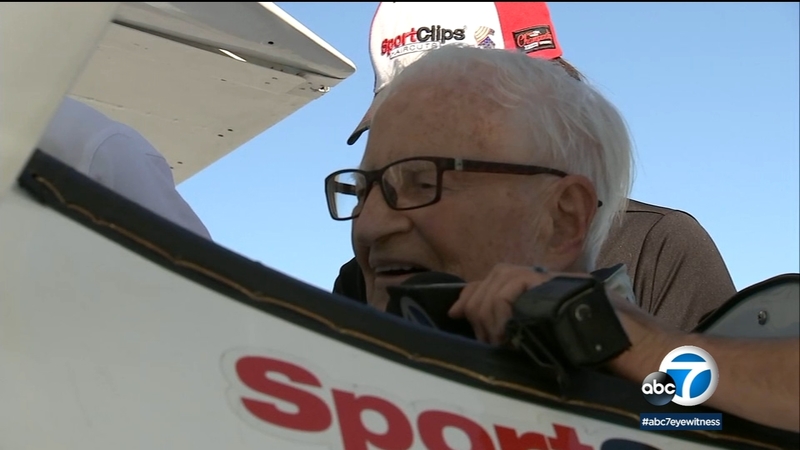 Ageless Aviation gives vets once in a lifetime chance to soar

VAN NUYS, LOS ANGELES (KABC) -- It's been years since Army Private First Class Gordon Reynertson has been in a World War II plane.

He and other war veterans took flight from Van Nuys Airport, in a Boeing Stearman World War II biplane - a plane once used to train aviators for combat back in 1943.

"I'm just looking forward to getting into this thing and flying," said Reynertson
Reynertson knows it well from his time as a 19 year-old in France as an Army Private First Class.

"There was always one of these ahead of us whenever we went anywhere, because the Germans didn't bother them, they'd rather shoot at us," he said.

The flight was made possible by the Ageless Aviation Dreams Foundation.

Pilot Mike Sommars is the volunteer captain taking veterans up.
"If I got paid to do this it wouldn't be any fun," Sommars said.

The veterans are between the ages of 87 to 97-years-old and live at the same retirement community in Glendale.

"They come back with all the stories," Sommars said. "And they are stories that they haven't even recalled."

"You sit there buckled up...when you're sitting you can't see anything because the nose is up," said Bob Wilkins, who was an Airman Second Class in the Air Force.

"Then when you take off...then everything just calms down, the noise quietens, and then they start doing a little maneuvering. And so you have a little more fun, it's a great experience," Wilkins said.
Each flight, lasts about 20 minutes.

"Great! It was fabulous. I could see stuff I never dreamt about," Reynertson said.