KABC
When Army veteran Garrett Goodwin saw a panhandler in Tampa, Fla. asking for money while wearing a military uniform, something didn't look right. So he confronted the man, demanding to see proof of his military service.

"I'm about public safety and public service," Goodwin told ABC affiliate WFTS. "And when it comes to the military, seeing people in uniform that, you know, we bled, sweat, cried and burned through - it disgusts me."

Goodwin, who served as an Army combat medic from 1994 through 2003, said it was a JROTC patch on the man's uniform that raised a red flag. When the panhandler couldn't produce a veterans ID card, Goodwin demanded that he take off the uniform.

"You take that uniform off," Goodwin can be heard saying in a video posted of the confrontation. (WARNING: Strong language)

Goodwin is not the first serviceman to confront someone they believe to be posing as a veteran. "Stolen valor" has become a hot topic in recent years, with stories of outrage over everyday citizens posing as combat veterans. But while many people have praised Goodwin for taking a stand against the panhandler, others have been critical of the way in which Goodwin confronted the man, following him down the street, yelling.

"And I would have made sure he had a place to live and food in his stomach and the services he needed," Goodwin told WFTS. "But he wasn't a veteran."

Goodwin believes the man owes him, and other veterans, an explanation.

"Some people have called me a bully on the internet, and I think he's a bully wearing a uniform holding up a sign walking up to people's cars in an intersection looking for money," he said. "I think he's bullying people out of their money."

The panhandler has not been identified by WFTS. As of Monday, there was no sign of him at the intersection where the confrontation took place.
Related topics:
societymilitary uniformsmilitarynationalu.s. & worldarmycaught on camera
Copyright © 2020 KABC-TV. All Rights Reserved.
RELATED 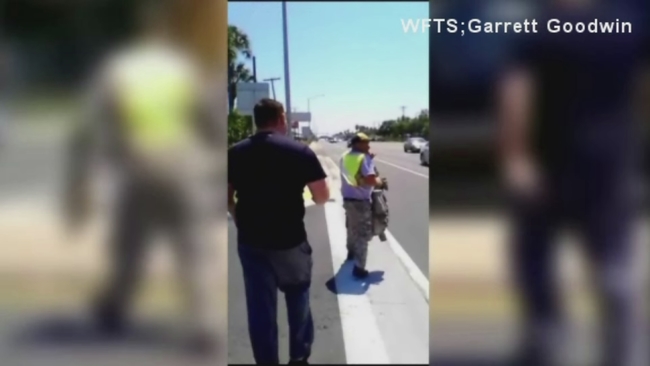