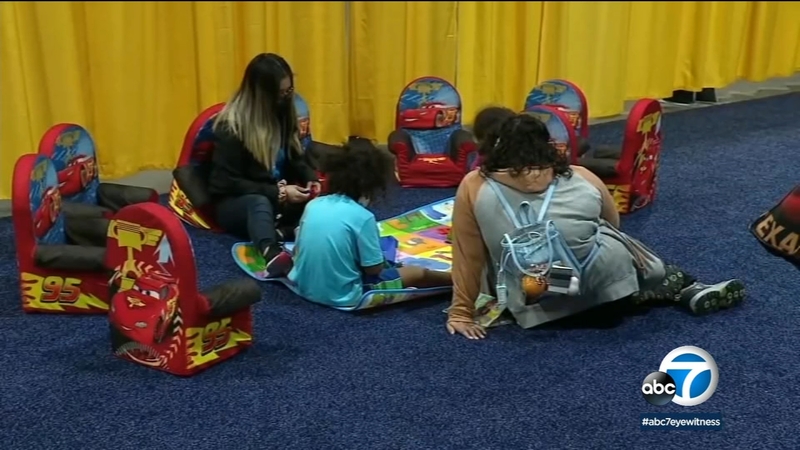 LONG BEACH, Calif. (KABC) -- The Long Beach Convention Center has been serving as an emergency shelter to house unaccompanied children who crossed the U.S.-Mexico border. Health and Human Services Secretary Xavier Becerra toured the shelter Thursday and said he's proud of the city of Long Beach as well as the state of California.

The venue has served as an Emergency Intake Site (EIS) for unaccompanied migrant minors since April 22.

"We want to really thank the people of Long Beach who have really stepped up to make this a welcoming venue for these kids," Becerra said.

Alongside Long Beach city leaders, including Mayor Robert Garcia, Becerra met with those charged with operations at the EIS and with volunteers.

"All of the health care workers are in there, a full clinic and hospital setup. They're getting education four hours a day and they're playing. They look like any other kid in an environment they're comfortable in, but we also know that these centers have to be temporary," Garcia said.

There are ways for people to help directly at the site which is schedule to close in August.

Some migrant children staying at the Long Beach Convention Center could reportedly be reunited with their families within the coming days.

"Additional ways to help beyond the 70,000 books and toys that have been donated, is for folks to visit the longbeach.gov/migrantchildren page and there's information on how to volunteer. Right now we're doing a letter-writing campaign across the city to help write letters for the kids," Garcia said.

According to a spokesperson with HHS, 671 minors were housed at the Long Beach site as of Thursday, with 28 currently testing positive for COVID-19. That's about half of last week's total. The children at the EIS range in age from 5 to 17 years old.

Becerra said he was happy to see the minors in a welcoming environment.

According to HHS, by the end of Thursday, 102 children were set to be united with their families in the U.S. or sponsors.

A mental health expert says unaccompanied migrant children who will be temporarily housed at the Long Beach Convention Center may need emotional support after experiencing the trauma of leaving their families behind.