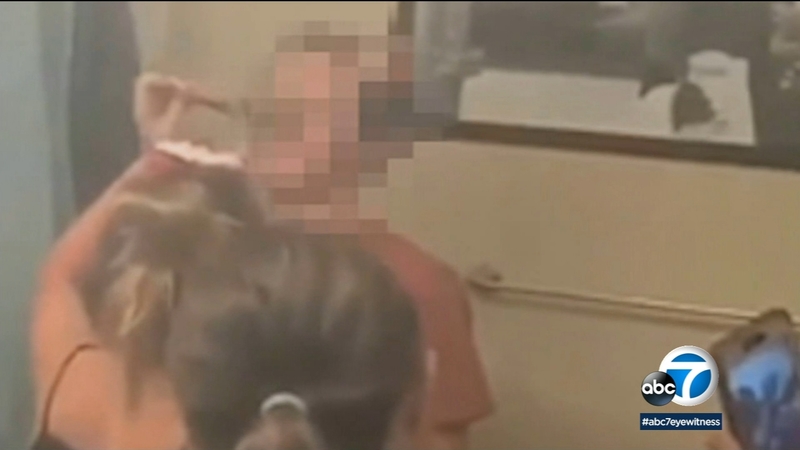 LANCASTER, Calif. (KABC) -- Students and Lancaster community members are calling for cooler heads to prevail following the death threats and extreme criticism leveled at the teens in a racially insensitive video that has gone viral.

The video shows several Quartz Hill High School students saying the N-word and uttering other remarks about people of color -- one even appears to be putting on dark face paint.

"We cannot collectively say that all whites are bad and all blacks are good or all browns are good," said Bishop Henry Hearns at a press conference held Thursday.

The video is going viral on social media and is now being investigated by local authorities and the Antelope Valley Union High School District.

"What really hurt me is that these young kids really don't know what they're doing," said Hearns.

Hearns says while the video was disturbing, perhaps the teens in the video didn't realize how hurtful that word is to many people of color.

As for the people who have been threatening the teens in the video, Hearns had this to say: "...Please change your mind because you are wrong. Let's help these young people so they can become productive citizens in this community."

Angelie Zambrano, a student at Quartz Hill, is friends with one of the girls in the video and says she, along with the others, are terrified. Some of them are going into hiding with their families.

During Thursday's news conference, Zambrano recounted her conversation with her friend following the aftermath of the video.

"I asked her what went through their heads when they said what they said and did what they did and she said 'To be perfectly honest with you, I don't know. It was a mistake and I'm really sorry about it,' said Zambrano. "It made me think about something. We're pointing fingers and blaming people,and hating on them but we can't kill hate with hate."

Zambrano said her friend never uttered a word in the video and was horrified when she realized what some of the other kids were saying and doing.

"She was really distraught getting death threats for something she didn't even say."

"We were recently made aware of a social media video showing a group of teenagers exhibiting deeply offensive, and inexcusable racist behavior. This runs counter to the District's core values of integrity, respect for the individual, diversity, and community. We are working on identifying those in the video, while including our law enforcement partners, and will take action as deemed appropriate. We strive to provide a culture of inclusivity and kindness. We ask all parents, students and community members to share our commitment to compassionate and kind conduct both on and off campus."
Report a correction or typo
Related topics:
societylancasterlos angeles countyhigh schoolrace relationssocietysocial mediaschoolstudentssnapchat
Copyright © 2021 KABC-TV. All Rights Reserved.
TOP STORIES
Hundreds line up outside Westwood passport office amid massive backlog
CA EDD to begin distributing benefits to claimants this week
Skeletal remains found in Ballona Wetlands are ID'd as missing woman
David Ono reports from Japan
AL governor: 'Start blaming the unvaccinated' for rising COVID cases
West Nile virus positive mosquitoes confirmed in Los Angeles County
Some LA restaurants temporarily close amid COVID-19 spike
Show More
Doctor says many hospitalized COVID patients express remorse
Untreatable 'superbug' fungus has spread in 2 US cities, officials say
Jurassic Quest returns as drive-thru attraction at Pasadena Rose Bowl
Free money for all? Garcetti hopes local pilot programs bring change
'Indians' no more: Cleveland finds new name for baseball team
More TOP STORIES News