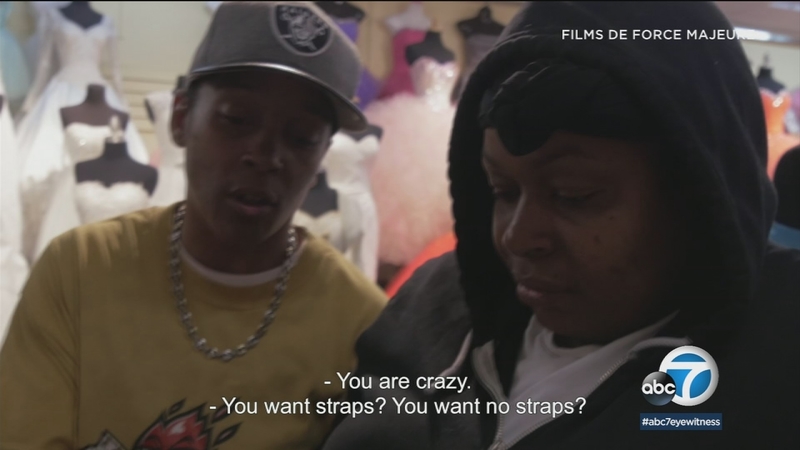 DOWNTOWN LOS ANGELES (KABC) -- At the Orpheum Theatre in downtown L.A. on Thursday, the creators of a new documentary called "Game Girls" walked the red carpet of Outfest Los Angeles ahead of its weekend premiere.

"Game Girls" tells the story of Teri Rogers, then a homeless woman living on Skid Row, and her girlfriend Tiahna.

The movie is directed by Alina Skrzeszewska, who had such an interest in experiencing and documenting life on Skid Row that she voluntarily lived there for two years.

"'Game Girls' is a love story and I think we need a love story from Skid Row," she said. "My friends who were from L.A. thought I was insane."

But it helped her tell the stories of those who live there, such as Teri, who was homeless for 15 years beginning at the age of 16.

"Just try to move forward. So we can find out who we are as individuals because we're stuck at 16 years old when our parents put us out," Rogers said.

Skrzeszewska added that every person on Skid Row has experienced some form of trauma in their life.

"I'm not going to fake the funk. I had a few detours, but I'm satisfied and I'm grateful. I'm headed to where I want to be," Rogers said.

"What is really going on - I don't think most people want to really see that, acknowledge that. People don't like to see a lot of the pain," she said.

The hope is with the movie they can begin to see that and see that human beings are suffering on the streets, but sometimes finding love in the process.
Report a correction or typo
Related topics:
societyskid rowdowntown lalos angeles countylgbtqmovieshomeless
Copyright © 2021 KABC-TV. All Rights Reserved.
TOP STORIES
CDC reverses course on indoor masks in some parts of US
How do new CDC guidelines affect SoCal?
1 killed, 1 wounded in shooting at Corona movie theater
Arrest made in fatal shooting of Rite Aid clerk in Glassell Park
CSU to require all students, staff to get COVID-19 vaccine
OC congresswoman introduces Kobe Bryant Day resolution
Bay Area teen attacked by crocodile while vacationing in Mexico
Show More
Video: Dog thrown from truck in West Hills crash
OC restaurant requires customers to prove they are not vaccinated
Simone Biles explains why she 'took a step back' from team finals
'This is how I'm going to die': Officers tell Jan. 6 stories
Parents in Tustin protest school mask requirement
More TOP STORIES News