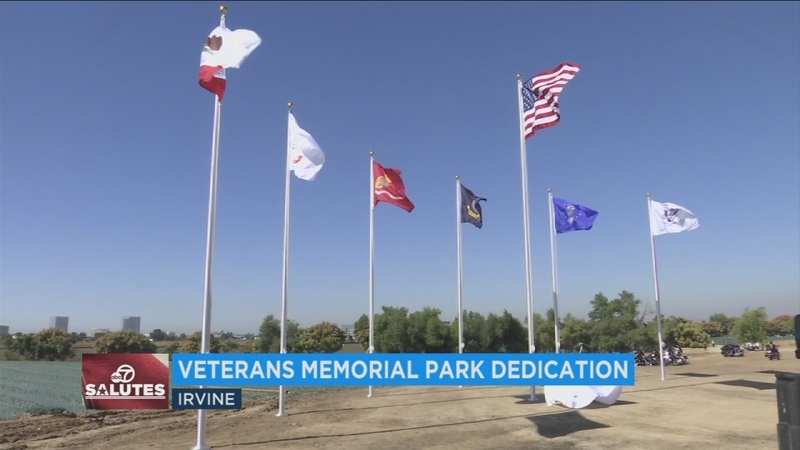 IRVINE, Calif. (KABC) -- The American flag was raised Friday at the future site of the Southern California Veterans Memorial Park, which will be the first veterans cemetery in Orange County.

"To the 132,000 veterans who live here right now, we're going to have a place to rest here with our family, here where we've lived, here where we've chosen to be," said Bill Cook, chairman of the OC Veterans Memorial Park Foundation.

Veterans of the Armed Forces with roots in Orange County have been buried in neighboring Riverside or L.A. Counties, something that has bothered Vietnam vet Dave Lopez. He Left on a plane headed for war from the El Toro Marine Air Base in Irvine in 1967.

"Thanksgiving day 1967 in Vietnam, my best friend died in my arms and it's been a downer ever since, but this rejuvenates my spirit and I feel a heck of a lot better," he said.

El Toro Marine Air Base was closed in 1999, but to the men and women who served, worked and spent time on the base - it's considered hallowed ground.

"Several of us in this organization trained down at Camp Pendleton, were loaded onto aircraft here and flown off to Vietnam. We watched thousands of those young teenagers die there. This was the last place they stood alive on American soil," Cook said.

Cook said the first veterans could be buried at the new cemetery in 18 months and one day, there will be room for 210,000 grave sites.