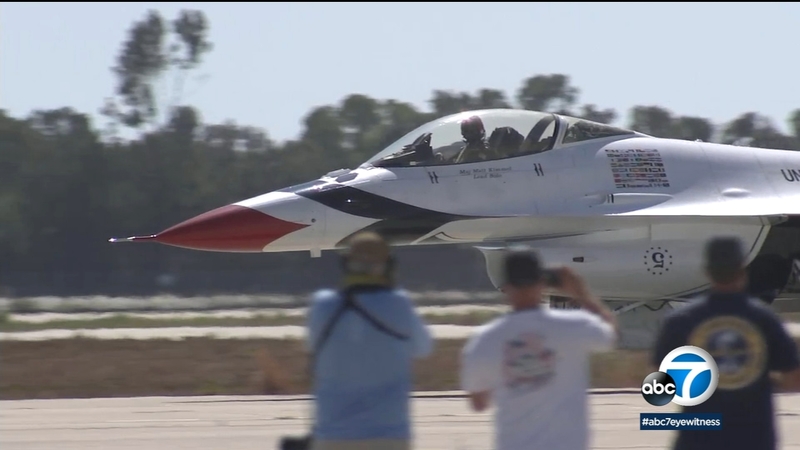 Some were housed at the Lyon Air Museum in Santa Ana.

The military kept its jets at the Joint Forces Training Base - Los Alamitos.

The show director of the Great Pacific Airshow, Kevin Elliott, promised the weekend would be unforgettable.

"We are going to be putting on the most amazing display that the West Coast has ever seen and we are expecting huge crowds," Elliott said.

The show director said 2.5 million were expected to make their way to the fourth annual event.

Among the performers ready to amaze crowds were the Red Arrows from the U.K., Snowbirds from Canada and the U.S. Air Force Thunderbirds.

Thunderbird Five, Matt Kimmel, explained why the No. 5 on his jet was upside down.

"One of us will go upside down while No. 6, she moves in to make the optic happen for a couple of my maneuvers, so I'm driving for like two miles just completely flat at about 450 knots, so about 500 miles an hour and just driving straight in, level, at 150 feet right by the crowd on the pier there," Kimmel said.

The show is not just about the aerobatics.

A P-51 Mustang could take spectators back in time.

Walter Drake flew a fighter like this one in World War II.

"Our main job was escorting the bombers and on D-Day we patrolled the beachhead for our troops to land and that was June 6, 1944," Drake said.

Not everyone in the cockpit serves in the armed forces.

Jeff Boerboon was a civilian performer who said though it may not look like it, his two planes fused into one will shock crowds.

"You see it up there doing vertical snap rolls and spins and outside loops, and it's a full-on aerobatic airplane," Boerboon said.

The show goes from Friday through Sunday and is free, but VIP seating is available for purchase here.

With more than two million people expected over the weekend, the director of the show recommended people carpool or go with ride-share.

You can check out The Great Pacific Airshow, Friday through Sunday at Huntington Street and PCH.