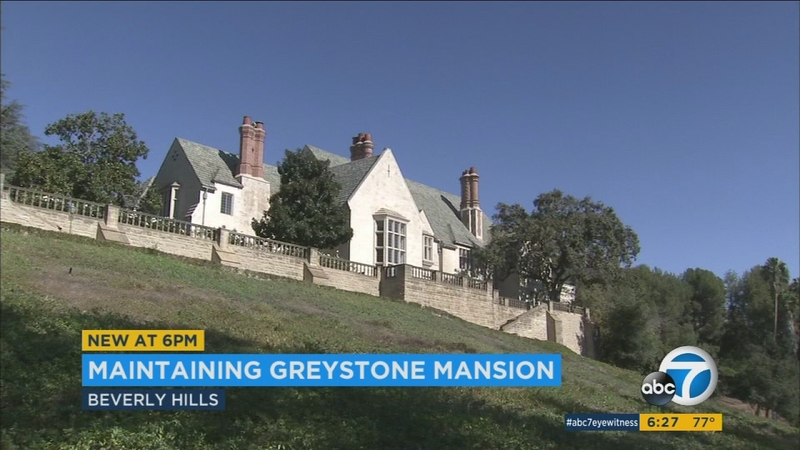 BEVERLY HILLS, Calif. (KABC) -- Those visiting Greystone Mansion Park will notice is looks very much like it did in the late 1920s. That's because the property is carefully maintained by the city of Beverly Hills, which bought the property in 1965 for just over $1 million.

The estate cost California oil tycoon Edward Doheny the princely sum of $3 million for the land and mansion back in 1928. Greystone Mansion was a gift to his son Ned.

The group Friends of Greystone has tasked itself with helping to maintain the property.

Their current project comes with a price tag of $300,000 as they look restore the hand-carved wood in the grand entry, which was painted over, sandblasted and shellacked.

"We are very fortunate to be in Los Angeles and have our own Hearst Castle of Southern California, built by the Doheny family who was the first family to discover oil in downtown Los Angeles," Susan Rosen, the president of Friends of Greystone said. "We are rich in California history. We have to do everything we can to preserve this house and the gilded age of architecture."

The mansion is 46,000 square foot and features 55 rooms. It was only second in size to Hearst Castle when it was built.

Greystone Mansion had every modern convenience of its day, but Ned Doheny only lived in the home with his wife Lucy and five children for five months.

He was found dead in what police stated was a murder-suicide with his friend Hugh Plunkett in 1929.

The two of them were bagmen for Edward Doheny in the Teapot Dome oil bribery scandal.

Those at Greystone Mansion believe the murder mystery and other legends may draw visitors to its doors as much as the beautiful gardens.

"I'd say we're one of those hidden secrets," Sara Scrimshaw with Greystone Mansion said. "The people who know about us love us and they both want to tell others and also not because they love that we're not a really busy place. We're a city park, so we're open every day and admission is free."

The Friends of Greystone plans to host the "Party to Preserve: A Magical Evening of Food, Art, and Live Music in Doheny Greystone Mansion."