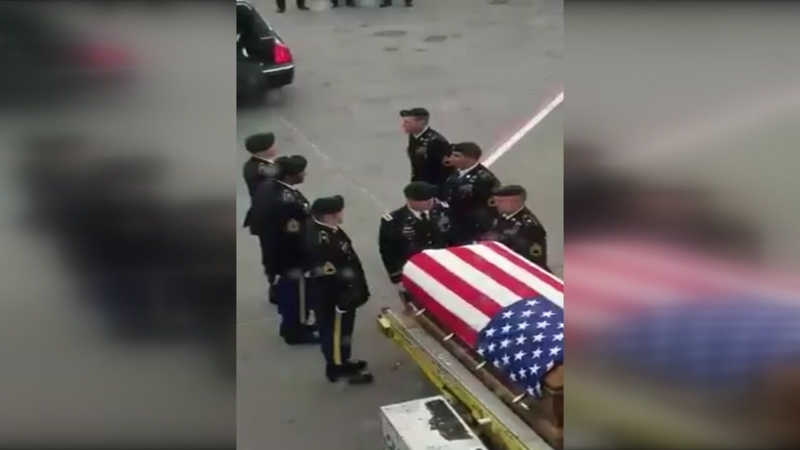 RALEIGH, N.C. -- When Lisa Williams' plane arrived at Raleigh-Durham Airport, passengers were asked to wait to let someone off the plane first.

When she looked out the window, there were several soldiers unloading a flag-draped coffin from the cargo hold. For minutes, the plane remained silent, aside from the sniffles coming from the passengers.

A woman walked over and placed her hand on the casket to say her final goodbyes, and others -- presumably family members -- joined her.

Then, seven Green Beret soldiers dressed in full uniform carried the casket off the plane and loaded it into a black hearse, paying their respects as they marched away.

Eventually, a pilot came on the intercom to thank the passengers for waiting.

Williams shared video of the heartbreaking moment on her Facebook page, writing there was not a dry eye around her. Much like it brought them to tears, it has moved millions of others around the world.

The post was shared tens of thousands of times, eventually making its way to T.J. Thomas.

Thomas reached out to Williams to thank her for sharing the video because she was the woman seen saying her final goodbyes to her husband, Warrant Officer 1 Shawn Thomas.

The Special Forces member served in the U.S. Army and was stationed at Fort Bragg in North Carolina. He was fatally injured in a vehicle accident while serving in Africa, the Army Times reported.

The fallen Green Beret leaves behind his wife and their four young children. Thomas was buried Thursday at Arlington National Cemetery.

Watch the full video below