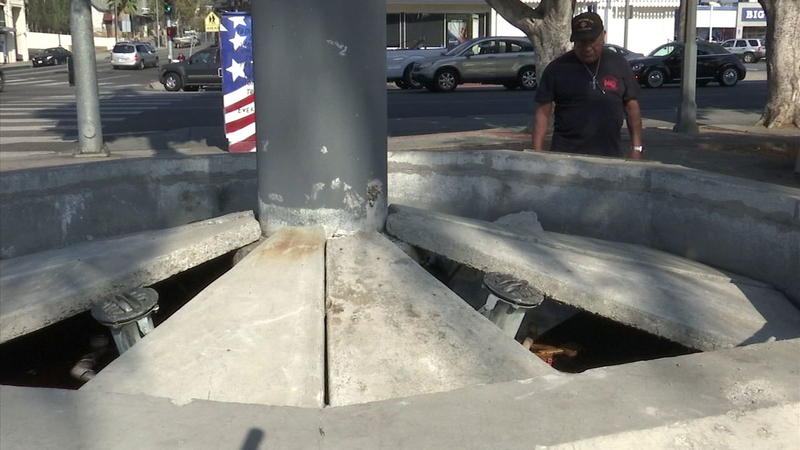 HIGHLAND PARK, LOS ANGELES (KABC) -- The Veterans Memorial Square on York Boulevard and Figueroa Street in Highland Park is supposed to be a place that honors the sacrifice of those who've served, but locals say it's been neglected by the city of Los Angeles -- who owns the land and allowed it to fall into poor condition.

"I feel very insulted to see our monument like this, being disrespected," said Ben Felix, a Vietnam War veteran.

On Veterans Day, several Highland Park veterans went to the memorial to pay their respects. They found that the memorial had been partly destroyed by someone who had used a hammer to vandalize the fountain.

"This belongs to our people that fought for us to have freedom. Is this how we're going to pay our veterans back? By the filth and the dirtiness? They were dying for us," said Rosa Rivas, who has lived in Highland Park for 37 years.

A group of neighborhood veterans gathered at the monument Tuesday, angry at the city because their requests for improvements have been ignored.

"The last two months, I've sent several emails to field Rep. Bill Cody, all of which were unanswered, to inform him that for the past five to seven months, the lights that illuminate the flag have been burned out," said David Bloom, a veteran who has lived in Highland Park his whole life.

Councilmember Gil Cedillo's office, which blames city bureaucracy for the delay, said they've been trying to secure funds so the Department of Recreation and Parks can make the necessary improvements. Cedillo calls the monument one of the landmarks of his district.

"We are also budgeted to enhance it. I think we're going to have a fountain there, replace the flags," Cedillo told Eyewitness News. "With the elements of the wind and the fires, the flags get tattered within a year, so we're looking for alternatives."

Cedillo's office said they hope to have the improvements completed by February. Meantime, Highland Park vets say they'll believe it when they see it.

"What I want Gil Cedillo to do is share the bid with us that it takes to fix this fountain so we can raise the money on our own," Bloom said.
Report a correction or typo
Related topics:
societyhighland parklos angelesveteransvandalismveteran
Copyright © 2021 KABC-TV. All Rights Reserved.
TOP STORIES
2 men dead after fire at Canoga Park marijuana grow operation
Mark Ridley-Thomas to surrender Wednesday ahead of arraignment
Record number of container ships waiting to enter SoCal ports
Plane erupts in flames after crashing in Texas; 21 survive
Hemet police officer punches suspect in confrontation seen on video
California now only state at 'moderate' COVID transmission level
LA County urges public to avoid high-risk Halloween activities
Show More
No charges will be filed against former UFC champ Chuck Liddell
CA vacation home renters targeted with threat, vandalism
US expected to authorize mix-and-match COVID booster shots
Gabby Petito's parents speak out about Brian Laundrie
Down 2-0, Dodgers have Braves where they want them at home
More TOP STORIES News