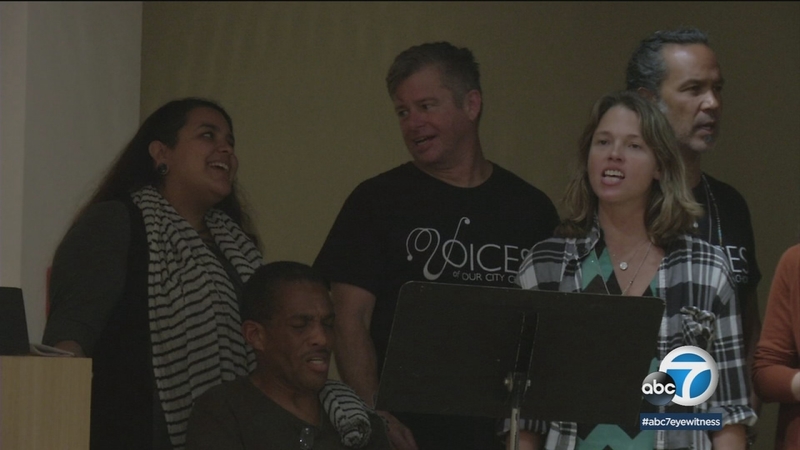 SANTA MONICA, Calif. (KABC) -- In a small auditorium at the Santa Monica Public Library, it was easy to spot the talent that makes up the San Diego-based "Voices of our City" choir.

One man was playing the harmonica, a woman was moving to the beat of Marvin Gaye's, "What's Going On," and a man with long, white hair and a Louis Armstrong-like voice sang "What a Wonderful World."

Many of them used to be homeless -- some of them still are.

Steph Johnson co-founded the group, originally meant to be a weekly jam session for people living on the streets of San Diego. "Most people need friendship and most people need community so the choir is this beautiful opportunity to do that," Johnson said.

The choir now performs as many as 15 times a month and 22 people are no longer homeless.

Johnson and the choir traveled Los Angeles Tuesday to perform and recruit musicians to form an ensemble in Southern California. They're looking for a choir director, guitar and bass players and singers.

Voice of our City's production manager, John Brady, said he was homeless and depressed after losing his boat house in a storm.

Brady credits the choir for helping him get through that time -- he calls them his surrogate family. Some of his friends are still struggling to secure a home but find a sense of belonging when they get together.

"When you gather together and you're singing together, and the songs that we sing, songs of happiness joy and peace, it loosens you up and you fall in belief with the songs," said Juan Campbell.

The group doesn't just a give people a voice in music, but in government. "We've become an incredibly activist voice as well," said Brady.

Self-taught harmonica player and formerly homeless Army veteran Kenneth Spears said he appreciates getting the opportunity to show the world a different side of people struggling to make it.

"To show homelessness from another point of view allows us to express our talents and our humanity rather than only pushing a shopping cart or in drug-infested areas," said Spears.