Hundreds gather in Silver Lake for 'say their names' vigil

Protesters walked the streets with a candle in hand and holding up signs that said "Black Lives Matter."
KABC
By Leanne Suter 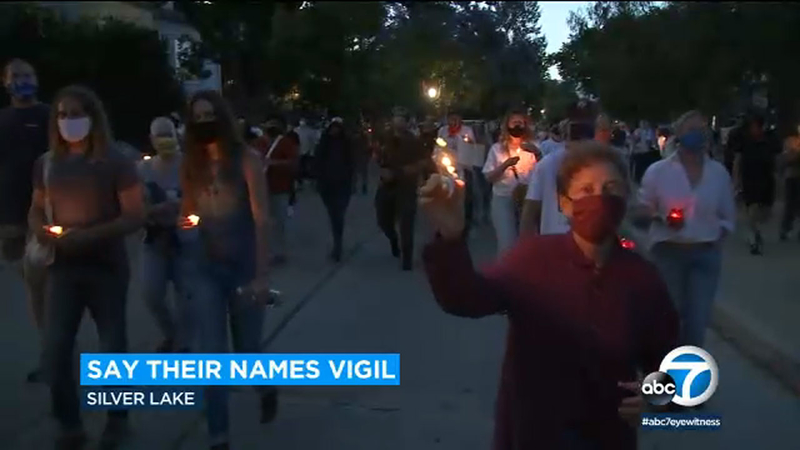 Hundreds gather in Silver Lake for 'say their names' vigil

Protesters walked the streets with a candle in hand and holding up signs that said "Black Lives Matter."

Several hundred gathered for the vigil and march, and shouted the names of people killed by police.

"Being out here today is really about representing all those lives that have been lost because it's important to give them respect and give them honor," said South Los Angeles resident Sterling Scott.

Amy Taylor of Los Feliz says it's important to honor the people who lost their lives and to "continue to fight for them."

Demonstrations demanding an end to racism and police violence continue across the nation after the death of George Floyd in Minneapolis.

Earlier Sunday, thousands showed up in Hollywood for an All Black Lives Matter march, organized by black members of the LGBTQ+ community.

A statement of solidarity was painted on Hollywood's best-known street ahead of the solidarity protest. The mural of towering letters spelling out "ALL BLACK LIVES MATTER" in the colors of the rainbow sat at the intersection of Hollywood Boulevard and Highland Avenue.
Report a correction or typo
Related topics:
societysilver lakelos angeleslos angeles countyprotestracismvigilgeorge floyd
Copyright © 2021 KABC-TV. All Rights Reserved.
More Videos
From CNN Newsource affiliates
TOP STORIES