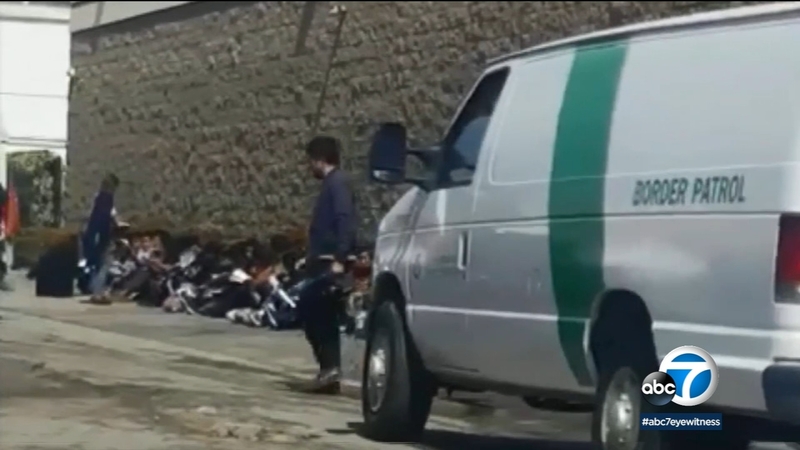 Two white vans with the U.S. Customs and Border Protection pulled up to a Greyhound bus station in downtown San Bernardino late Wednesday morning. After a handful of migrants exited, the vans pulled away.

"They're dumping them off with no support whatsoever," said Anthony Victoria with the Inland Coalition for Immigrant Justice. "And once they drop them off, they just leave."

Victoria estimates that more than 370 migrants have been dropped off in downtown San Bernardino since Tuesday, May 14. Many of them are seeking asylum, have paperwork for their court dates, and will be leaving Southern California.

But not before his organization offers them help.

"What we're doing is meeting them here, with our own vans ready to go," said Victoria. "We have food, water, and any medical supplies they may need. What we're doing is we're just trying to provide resources for them to find their way back home."

While U.S. Customs and Border Protection officials would not answer specific questions about where they're dropping migrants off, acting commissioner John Sanders provided this statement last week:

"For months, U.S. Customs and Border Protection has been very clear about the situation on the southern border, which is both a humanitarian and an operational crisis. To manage the unprecedented number of people in our custody, CBP began transporting hundreds of families by bus and aircraft from the U.S. Border Patrol's severely overcrowded processing facilities to less-crowded stations along the Southwest border. This is the latest contingency we've exercised in response to the ongoing humanitarian and border security crisis, which has overwhelmed the entire immigration system."

Victoria said he estimates 95% of these migrants are fleeing Central American countries. But not all of them are seeking asylum.

"I would say probably more than half (are seeking asylum)," said Victoria. "(The rest) are people just migrating because of different causes. The persisting violence in these countries, and the persisting poverty. They're coming here for better opportunities."

Some of them are staying at nearby motels. Others are being helped by the Diocese of San Bernardino.

"They're coming through a difficult journey and difficult circumstances," said John Andrews, spokesperson for the Diocese of San Bernardino. "They're tired and somewhat disoriented coming to a place they're never been before."

Andrews said they've assisted approximately 4,000 migrants dropped off by the U.S. Customs and Border Protection in the Coachella Valley since October, 2018. He said Border Patrol started dropping off additional migrants in San Bernardino last week, and they've been assisting them with the process.

"(Border Patrol) would ask us if they could bring a certain number of folks to us, and whether we can accommodate them on this date," said Andrews. "And we basically tell them yes or no. Hopefully yes more often than no."

Donations help pay for shelter and food. Andrews said most migrants are only in Southern California for a few days, after which they help fund transportation for them to get to family members in other parts of the country, near where their asylum hearings will be held. Andrews said to his knowledge, all of the migrants they're helping are seeking asylum.

"We don't look at this as political, we look at this from the perspective from our faith," said Andrews. "We help those who are in need in desperate times. It doesn't matter what their legal status is, we're going to help them, and be there for them, because that's what we do."
Report a correction or typo
Related topics:
societymurrietasan bernardinosan bernardino countyriverside countybusvolunteerismiceimmigration
Copyright © 2021 KABC-TV. All Rights Reserved.
TOP STORIES
At least 3 dead, up to 99 missing in Florida building collapse
Security camera video shows moment of Surfside building collapse
Songwriter saves cow found in El Monte park after stampede
Bear dead after being hit by car in Pasadena
Thousand Oaks man transforms his condo into woodshop during pandemic
Britney Spears asks judge to free her from conservatorship
Nearly all COVID deaths in US are now among unvaccinated
Show More
New York court suspends Rudy Giuliani's law license
Chase of stolen Foothill Transit vehicle ends in Camarillo
Biden, bipartisan senators have deal on infrastructure
Housing Venice homeless to start Monday despite delayed funding vote
Walt Disney Concert Hall opens vaccine clinic in downtown LA
More TOP STORIES News