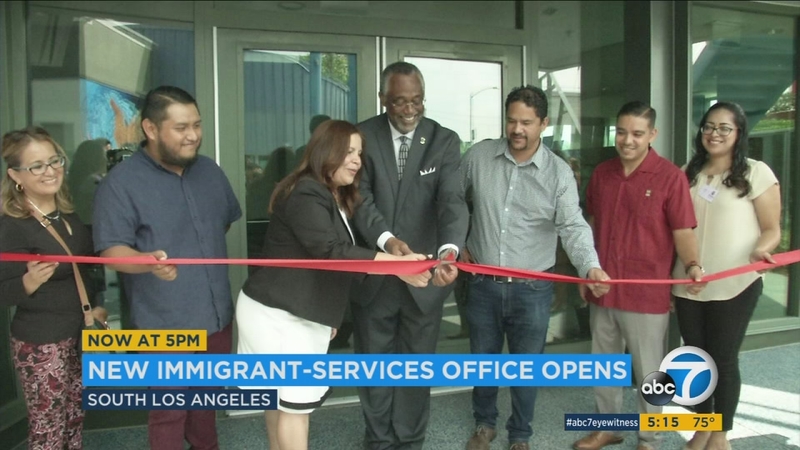 SOUTH LOS ANGELES (KABC) -- Subsidized in part by $500,000 from the Los Angeles City Council, an immigration services office in South L.A. officially opened its doors Wednesday at a ribbon-cutting ceremony.

The Coalition for Human Immigrant Rights of Los Angeles satellite office is part of an effort to help area residents apply for U.S. citizenship.

"We have been able to greatly expand all types of immigration services, with particular emphasis on citizenship services," Angelica Salas, CHIRLA's executive director, said at the event.

Between 2010 and 2014, more than 10,000 Los Angeles residents were eligible to apply for citizenship, according to a recent USC study. Many have not applied due to financial reasons, Salas said.

The move proves "once again that the city of L.A. stands with our immigrant community," Price said at the ribbon-cutting. "We're going to fight tooth and nail when it comes to taking care of each other."

"If you want to become a citizen and you live in District 9, please come in, because we might be able to do this for free," Salas said, adding that the new office has submitted 50 applications for citizenship since it opened in March.
Report a correction or typo
Related topics:
societysouth los angeleslos angeleslos angeles countylos angeles city councilimmigration
Copyright © 2021 KABC-TV. All Rights Reserved.
TOP STORIES
Record number of container ships waiting to enter SoCal ports
Hemet police officer punches suspect in confrontation seen on video
California now only state at 'moderate' COVID transmission level
LA County urges public to avoid high-risk Halloween activities
Plane with 21 on board crashes west of Houston, Texas
CA vacation home renters targeted with threat, vandalism
US expected to authorize mix-and-match COVID booster shots
Show More
No charges will be filed against former UFC champ Chuck Liddell
Gabby Petito's parents speak out about Brian Laundrie
Down 2-0, Dodgers have Braves where they want them at home
Women, minority firefighters accuse LAFD of sexism and racism
CA grandmother back home after 10-month battle with COVID
More TOP STORIES News