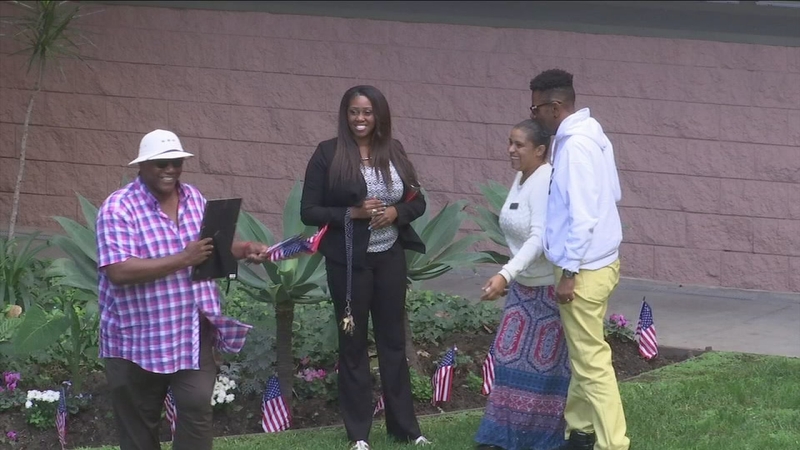 Bobby-Lee Marshall served 18 years in the U.S. Army. When he was deployed to Vietnam, it was his job to bring dead soldiers home from war.

"Probably one of the most terrifying things that i have ever done in my life because the grief of the families - the grief of the United States of America because of the soldiers that we lost," he said.

Marshall developed post-traumatic stress disorder while in the service and found himself a homeless veteran, living on skid row in downtown Los Angeles.

"It was painful. It was almost unbearable," Marshall said.

But through the help of the organization U.S. VETS which served 5,700 veterans last year, Marshall is back on his feet.

"I plant flowers for my mental clarity and stuff, if i get depressed, PTSD and stuff like that. I go out and I plant flowers and today, I put down flags every day for the families that was killed down in Texas and for the unknown soldiers that would never come home," said Marshall.

Bobby-Lee Marshall is one of 600 veterans who live at the U.S. VETS facility in Inglewood. All of the residents used to live on the streets. Here, they're getting more than just a home.

"Giving a homeless person a couple of bucks doesn't really solve the problem so it's really important that people in the community know that there's agencies like ours that are dealing with this in a very comprehensive way, providing not only the housing, but the employment assistance and the mental health counseling, creating social networks so they can really regain their place in society and be successful," said Stephen Peck, the CEO of U.S. VETS.

Whether it's singing in his church's choir or gardening, Marshall says he's in the best situation he's been in since getting out of the military in 1992.