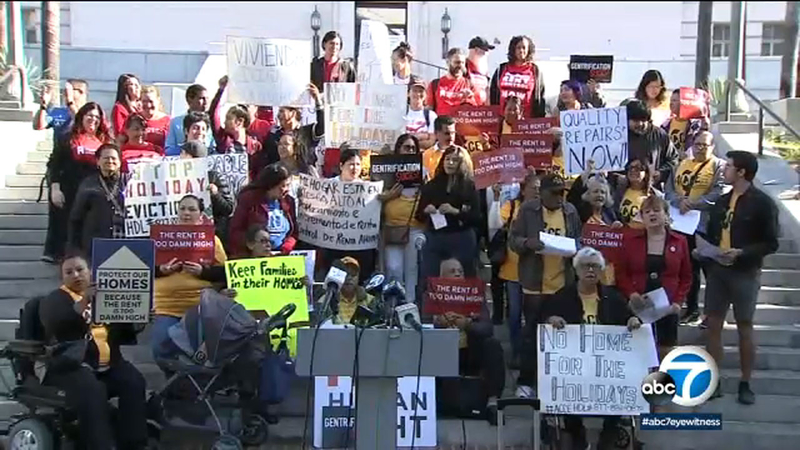 "That we would permit individuals to skirt the law, take advantage of some loopholes to evict literally thousands of citizens who can least afford to be evicted, is just unconscionable," said Councilman Curren Price.

Councilmembers voted unanimously on two items tasking the city attorney's office to draft a law designed to protect renters during the next three months.

Gov. Gavin Newsom signed a new rent control law last week that caps rent increases across the state. It limits those increases between 5% and 10% depending on the federal cost of living increase.

It also bans landlords from evicting people for no reason, meaning they could not kick people out so they can raise the rent for a new tenant.

"Just because of this window that we're in until Jan. 1, we could be looking at additional thousands of people becoming homeless," Councilman Mitch O'Farrell said after the vote.

O'Farrell and the council called the situation an emergency and wants the city attorney's office to draft a law in the next few days so it can be voted on by the full council by next Tuesday. The council also asked that the law be retroactive to the moment the Newsom signed the law last week, nullifying any "no-fault" evictions or rent increases already initiated since then.

In Burbank, renters and activists gathered at the Burbank City Council meeting to urge city leaders to protect them until the new law goes into effect.

"The reason why we are in such a rush is because we already have a number of tenants who've come to us getting evictions on Sept. 1 and their 60-day notice will have them out by Nov. 1, so we need something on the books," said Konstantine Anthony, chair of the Burbank Tenants' Rights Committee.

The Burbank City Council listened to public comment during the meeting.

The cost of housing in Southern California often shuts the door on countless families. A new report from ApartmentList.com found L.A. has the sixth highest renter cost burden in the country.

It also showed Los Angeles rent prices have gone up 17% while income here has only risen 10%.