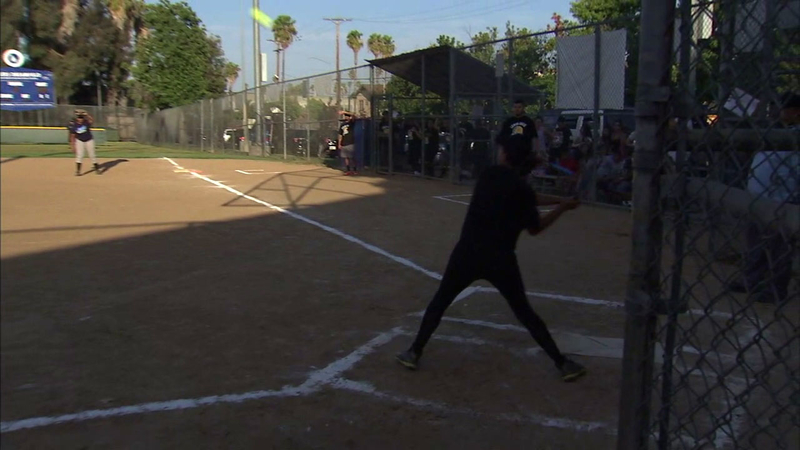 EAST HOLLYWOOD, LOS ANGELES (KABC) -- The city of Los Angeles launched a program called Summer Night Lights in 2007, which extended park hours until 11 p.m. in an effort to help children stay out of gangs.

Many players on a baseball field in East Hollywood Wednesday night were raised in the program.

"A way up and way out of a lifestyle that really doesn't hold promise," Councilman Mitch O'Farrell said.

O'Farrell threw the first pitch during the game and was joined by two big celebrities in the Hispanic community - Angelica Vale and her mother, Angelica Maria.

"For me, it's really important to be here, saying yes I'm here. I really applaud you guys. Just look at them. An all-family environment. I love it, I love it," Vale said.

Law enforcement and city officials said the results of the program prove their efforts have been effective.

"Crime is reduced once these programs come to these neighborhoods, so we can keep them going," O'Farrell said.

They said coming out for friendly games, such as the one Wednesday night, offered an opportunity to form relationships in the communities they serve.

"We're really trying to make a difference and bring purpose to a beautiful city that at times is delicate and we have to endure difficult moments as we have in the last two weeks. But we're here and we're committed and we're proud to be a part of all of this," LAPD Capt. Cory Palk said.