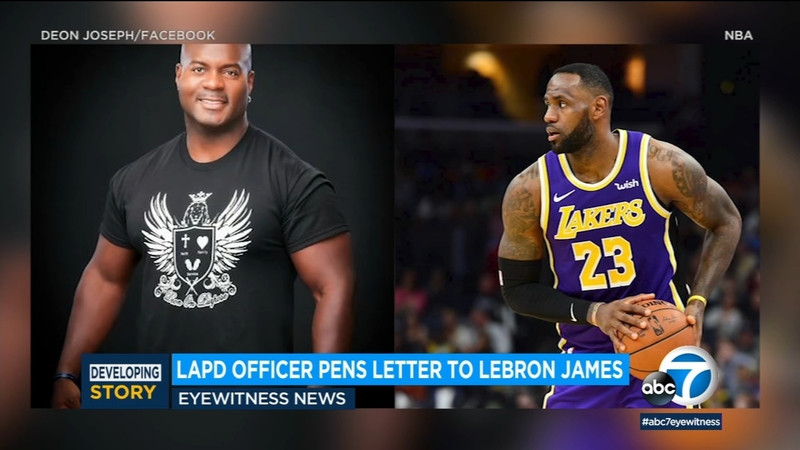 LOS ANGELES (KABC) -- A Los Angeles police officer recently took to social media to write a letter to Lakers star LeBron James, who has been vocal about police brutality and racial injustice.

Officer Deon Joseph wrote the open letter on Facebook in response to a recently deleted tweet by James that showed a picture of an Ohio police officer who shot and killed 16-year-old Ma'Khia Bryant, who was seen on video lunging at a woman with a knife.

The tweet had an accompanying caption, "YOU'RE NEXT #ACCOUNTABILITY," along with an hourglass emoji.

In a series of tweets, James later explained why he deleted the post.

LeBron James posted and later deleted a tweet about the fatal police shooting of Ma'Khia Bryant, 16, in Ohio. In a series of tweets, James explained why he deleted the post.

In his letter, however, Joseph said James' stance on policing shows a complete lack of understanding about the challenges of the job.

"I don't know if this will ever reach you, but my hope is that one day I can sit down with you and talk," the letter read.

Joseph added in his letter that he believes he can help James understand the reality of the profession.

"You are tired of Black folks dying? So am I. You hate racism and police brutality? So do I. But you cannot paint 800,000 men and women who are of all races, faiths, sexual orientations and are also mothers, fathers, sons, daughters, preachers, coaches, community members and just human with such a broad and destructive brush."

James has yet to respond to the letter.