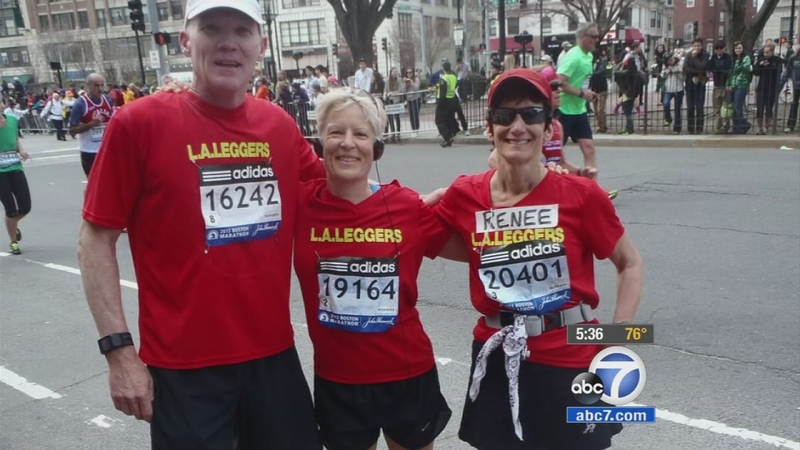 LOS ANGELES (KABC) -- A local man who survived the Boston Marathon bombing hopes to make a change and help find a cure for people with pancreatic cancer.

In 2012, avid runner Phil Kent, 59, trained for the Boston Marathon, but four months before the race he had chronic back pain that resulted in a devastating diagnosis - pancreatic cancer.

"I was in total shock and disbelief for the most part because every other aspect of my life was healthy and I felt good," he said.

Phil, while thinking his days were numbered, focused on making his dream of running the prestigious race into a reality. His physician, Dr. Gary Schwartz at Kaiser Permanente Woodland Hills, believed exercise would give Phil the fuel he needed to beat his disease.

"When you talk to him about marathons his eyes light up. That's a very important part of his being," Schwartz said.

Doctors tailored Phil's chemotherapy for training and his surgery was scheduled for 10 days after the big race.

But then tragedy struck. As he neared the finish line in Boston on April 15, 2013, his wife Sharon stopped him to take a photo. Phil said that ended up saving his life because seconds later the first bomb went off.

In a photo taken overhead, Phil and his two companions can be seen right next to where the second bomb exploded, about 20 yards away from the finish line.

"As we were coming up, we were grabbing our hands to get our picture taken crossing the finish line. That's the stage we were at and that's where we were," he said.

With major pancreatic surgery just days away, Phil believed he would never race again. But he found inspiration in the Hirshberg Foundation, a nonprofit focusing on pancreatic cancer research. His new focus was on the L.A. Cancer Challenge, a race for the cure.

Now, nearly three years after his diagnosis, Phil wants to inspire other pancreatic cancer patients not to give up. In 2014, he got his chance to cross the Boston finish line.

This Sunday, he hopes thousands of supporters will help him complete what he believes is the race to save lives.