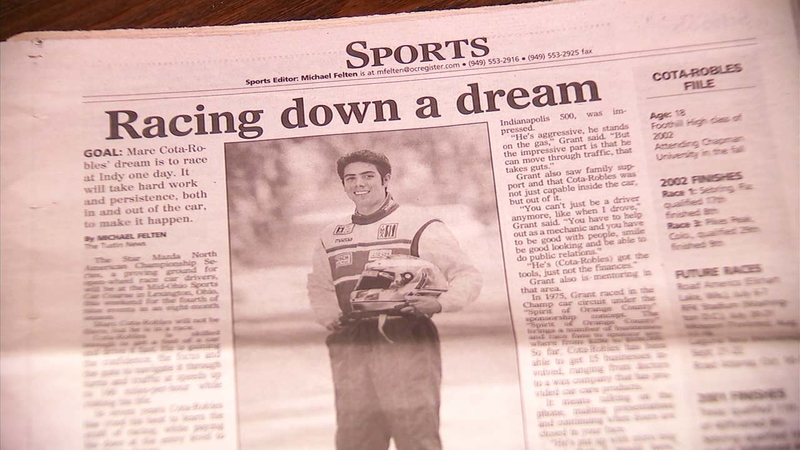 ORANGE COUNTY (KABC) -- ABC7's own Marc Cota-Robles grew up in Orange County near the cities of Tustin and Orange. Follow along as he takes a walk down memory lane!

Cota-Robles and his family moved to unincorporated Orange County and settled in a home on Crawford Canyon Road nearly 25 years ago.

Moving was a big change for Cota-Robles, who was just out of elementary school at the time.

He attended Hewes Middle School for three years before moving on to Foothill High School. And that's where he found his calling.

He was elected communications commissioner and was in charge of the daily announcements on the PA system.

His senior year, he was on the prom court. He was also named "Young Man of the Month" in May 2002. There's even a photo of him in the school newspaper Knightlife - showing Cota-Robles crammed into a trash can.

Thanks Ryon & 2WILD Karting for getting me back in the driver’s seat! Stay tuned to #abc7 for more in Orange! pic.twitter.com/Wjdrlg3R9w

He said he did OK in school, but it was his aspiring career as a teen race-car driver that made front page news in his hometown newspaper, The Tustin News.

However, his "need for speed" was interrupted by his need for a higher education just a few minutes from home at Chapman University to major in broadcast journalism.

During his freshman year of college, he started by busing tables, then spent nearly four years serving at the Orange County Mining Company.

Hey, it’s ME!! More to come from Watson’s Soda Fountain & Cafe in the Orange Circle — NEXT on @ABC7 at 6:30am! LIVE: https://t.co/a8eFAqjJ8p pic.twitter.com/nIPcVXzvF0

The spot has one of the best views in all of Orange County and has pretty good food, too!