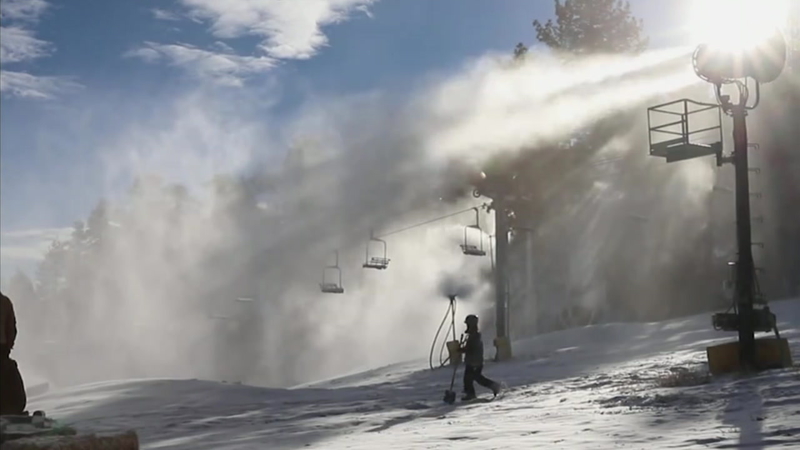 WRIGHTWOOD, Calif. (KABC) -- There were picture-perfect conditions for those who made it up to Mountain High near Wrightwood for opening day.

Despite the lack of natural snow, the weather was quite pleasant for skiers and snowboarders on the slopes.

"It's amazing. It feels so great," said Ani Guiumdzhyum, of Van Nuys. "It's like a breath of fresh air."

Last week's storm brought several inches of snow, but most of it melted with the warm weather that followed. But Mountain High still reports 12 inches of snow at the base, with 18 inches at the top of the mountain, thanks to manmade powder.

"Mother nature is always a part of it," said spokesperson John McColly, who was hoping to open for Thanksgiving Day. "We didn't get open then, but we're open now. And we had three or four days straight of great snowmaking, and that's what led to our opening here."

McColly also pointed out 35 new snowmaking machines, an investment of over a quarter-million dollars.

"They're called low flow," McColly said. "They don't require the energy or the fuel that a traditional snow gun does, so it can make the same amount of snow with less resources. It helps us reduce our carbon footprint and keeps us green."

McColly said forecasters are expecting several inches of natural snow over the next few days. He added they hope to have night skiing available by Friday.