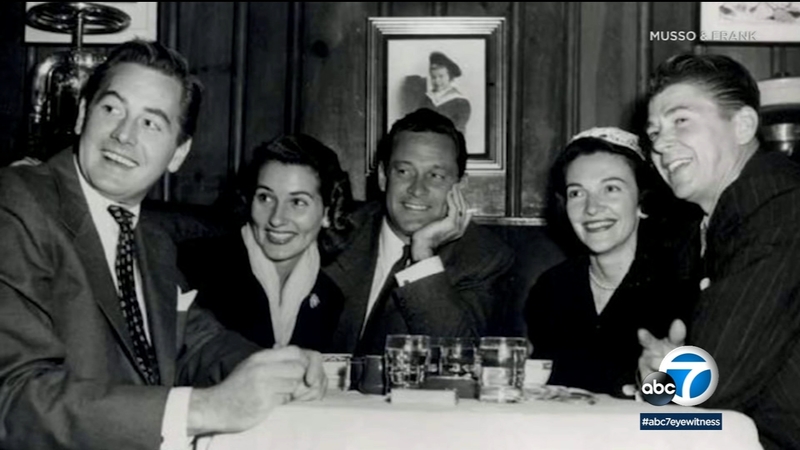 HOLLYWOOD, Calif. (KABC) -- The Musso & Frank Grill has been serving Hollywood's famous - and infamous - for 100 years.

Actor Danny Trejo said he's been going to the famed restaurant for over 50 years.

"I love this place. I love Musso and Franks. It's like, it just became a home. You know - Thursday night chicken pot pie and breakfast. I love eggs Benedict," he said.

Musso & Franks grew up with Hollywood. It became a fixture on Hollywood Boulevard, a place where scripts were sold and movie deals were made.

Hollywood lore has it that when Johnny Depp was starting out, he'd give out the restaurant's phone number as his office number and take calls and meetings here.

From the day it opened, there has been one constant at Musso and Franks - their signature martini.

"Far beyond having the finest cuisine in Hollywood and fantastic martini's, it really is the team that really makes you feel like you're part of our family. As family we're just really proud of our team for making the community feel that way and that's the key to the success of the restaurant," said owner Mark Echeverria.

The owners said it's the environment that's helped keep their doors open all this time. Tina Echeverria said "there's not a lot of photographers that come into Musso's to bother these people so it's a really good spot to dine and do business. It's their home. You come into Musso's because it's your home."
Report a correction or typo
Related topics:
societyhollywoodlos angeles countyfoodrestaurant
Copyright © 2021 KABC-TV. All Rights Reserved.
More Videos
From CNN Newsource affiliates
TOP STORIES