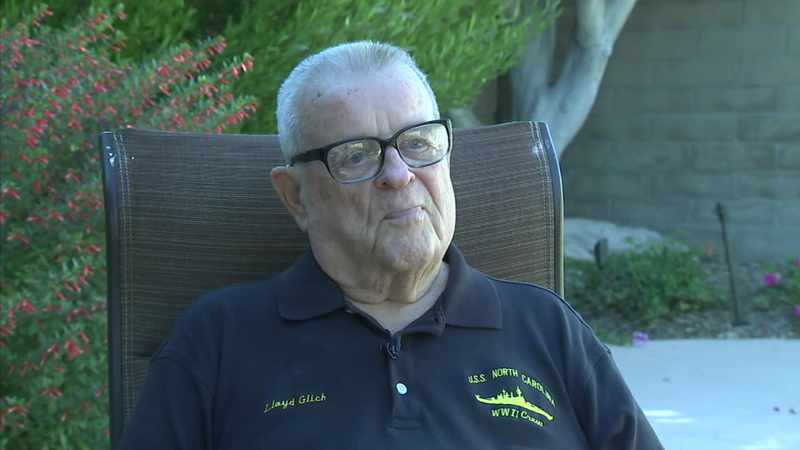 "My old battleship the North Carolina - and all of the sudden she has to face another typhoon," he said.

The former Navy musician was aboard the U.S.S. North Carolina during World War II, when the powerful typhoon Cobra struck over the Philippine Sea.

The battleship and crew survived, but three destroyers in the same fleet sunk. Nearly 800 men died.

"The ships broached sideways in the water and they were at the mercy of the sea," he said.

"It's like coming to your hometown after you haven't been there for 20 years," he said.

During his time on the ship, he played trumpet in the band. He then continued a career in music and public service.

He's served a combined 40 years with the Los Angeles police and Alhambra police as a reserve officer, as well as time on the LAPD's band.

At 94, the veteran continues to volunteer. He's also a docent on the U.S.S. Iowa and shares WWII stories about life on a battleship.

"The Boy Scouts who come through on a regular basis, who have no conception of what life on a battleship is. I learn from talking to them, they learn from talking to me," Glick said.
Report a correction or typo
Related topics:
societyhuntington beachorange countynorth carolinalive musicnavybandmilitarymusicvolunteerismhurricane florenceworld war iiveteran
Copyright © 2021 KABC-TV. All Rights Reserved.
TOP STORIES
LA to require proof of vaccination or testing for city employees
How do new CDC guidelines affect SoCal?
COVID hospitalizations in LA County hit highest level since mid-March
$20K reward offered in murder of Army veteran in Lancaster
3 El Super grocery stores fined over lack of paid COVID leave
Flex Alert issued for California for Wednesday from 4 p.m. to 9 p.m.
Gunman opens fire inside Corona movie theater, killing teen
Show More
Gov. Newsom pulls kids from summer camp with no mask requirement
CDC reverses course on indoor masks in some parts of US
Ed Buck found guilty in West Hollywood meth overdose case
Walmart will cover 100% of college tuition for its workers
Expect higher prices, fewer supplies when back-to-school shopping
More TOP STORIES News