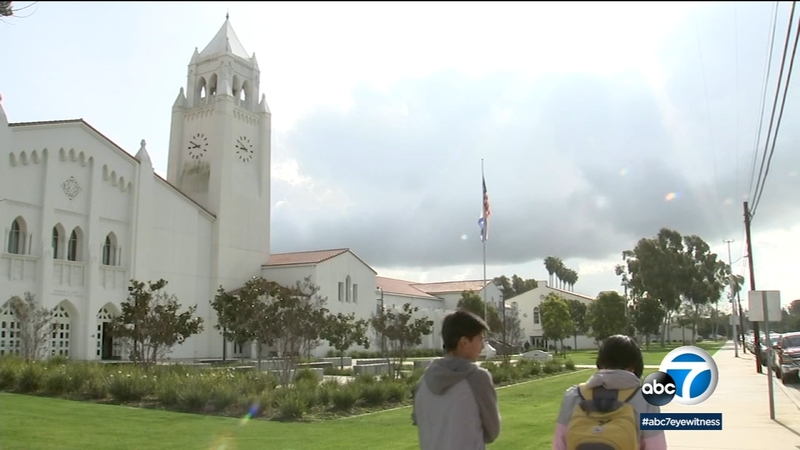 NEWPORT BEACH, Calif. (KABC) -- The principal of Newport Harbor High School is condemning an act of anti-semitism after vandals struck the campus over the weekend.

Newport Beach police were called to the school Monday after 10 posters the school describes as "Nazi" were found on different walls of the campus.

The posters were immediately removed, according to school principal Sean Boulton. The school and district administration are working closely with the police department on the investigation.

"We condemn all acts of anti-semitism and hate in all their forms. We will continue to be vigilant with our stance, and the care of our students and staff," Boulton said in a statement.

This comes just a week after photos showed partygoers -- believed to be students at that high school -- posing in a Nazi salute with a swastika formed out of plastic cups.

A photo taken at a teen party in Newport Beach that showed cups arranged to form a swastika is sparking outrage in the community.

On Thursday, Eva Schloss, who survived the death camp at Auschwitz and is the stepsister of Anne Frank, met with students privately at Newport Harbor High School hoping to send a message.

"We have to learn from history and the mistakes that we have made, and try to make it a safer and better world for everybody," Schloss said.
Schloss said the students apologized.

The school district and Newport Beach police are investigating the incident. No action has been taken against any student so far.
Report a correction or typo
Related topics:
societynewport beachorange countynazispartyinvestigationviral
Copyright © 2021 KABC-TV. All Rights Reserved.
More Videos
From CNN Newsource affiliates
TOP STORIES