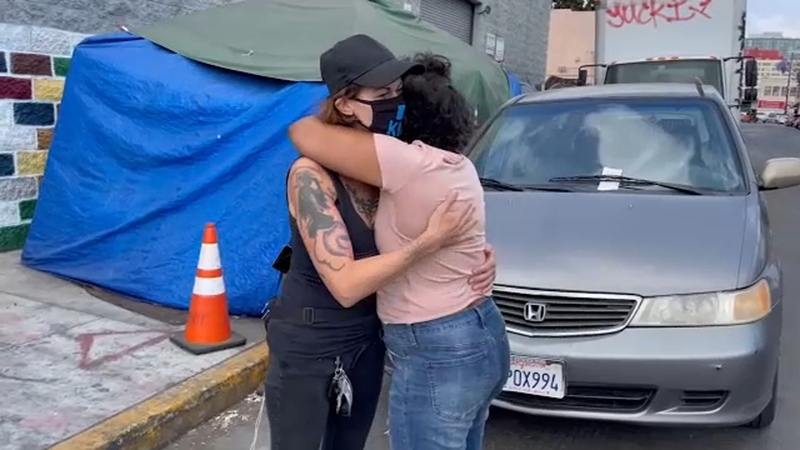 LOS ANGELES (KABC) -- Many organizations try to help or house the homeless, but a local nonprofit called The Sidewalk Project is using what might be seen as an unorthodox approach.

Instead of a housing first-model, The Sidewalk Project focuses on harm reduction - by first meeting someone where they are physically and mentally.

"It's not for us to place them in their place of purpose. It's just for us to find out, how can we help? And how can we hopefully help them not harm their neighbor or themselves in the process of their journey?" described "Crushow," who works with The Sidewalk Project.

The Sidewalk Project's help takes many forms. Some are as universal as assembling bags for the homeless that have shirts and soap or toothbrushes and toothpaste.

"Our mission is to help people find health and happiness and well-being, however, that looks to them," says co-founder Stacey Dee.

Help could come by providing care for injuries or illness on Skid Row, or by stepping in as peace-maker during a heated exchange that could quickly escalate to violence.

More progressive assistance is also offered, like needle exchange or providing condoms for sex workers and a date list that warns of predatory clients that might cause harm.

"Drugs and sex and all of this, it's a public health issue, it should not be a criminal issue. And we should be responding to the negative effects of drugs and sexuality with public health measures, right? Because then we can support people," said The Sidewalk Project founder Soma Snakeoil.

"I shouldn't judge my neighbor by the way they present themselves. I just judge them on how they, you know, how they treat me," Crushow adds.

Virginia Reilly has seen her life change because of The Sidewalk Project.

"There's other people that I've had come down to try to help and then there's always a twist somewhere, which makes it harder for people to trust people," Reilly said.

Reilly knew it wasn't safe for her to continue living on the streets, but it was The Sidewalk Project and Snakeoil who helped her see the beauty and safety of her new apartment complex, complete with herb and vegetable gardens.

In an emotional explanation, Reilly described how Snakoil helped her.

Being homeless and living on the streets can sometimes lead to a path of drugs, crime and arrest. But instead of putting the homeless in jail, Redondo Beach is helping them get their lives back on track through a program dubbed "homeless court."

Reilly still returns to the streets, but now she works with The Sidewalk Project creating what she calls "A Tree of Life."

She staples bags of Narcan Spray, which is used for the treatment of suspected opioid overdose, to trees on skid row. Not in an effort to stop drug use, but to reduce the harm of an overdose.

Having expanded to Las Vegas, San Diego and Phoenix, along with work in Australia, The Sidewalk Project believes their model of harm reduction and building relationships is the solution for those who aren't ready to leave a place they call home.

"The systems that have been put in place don't work. So let's try something different, like radical love," Dee said.

"We can talk about needles, we can talk about condoms, but these are like, you know, these are like tangible things that we do in the world. But there's so much more. You know, we just need to start by treating people with dignity and respect. And that can start with a smile," Snakeoil added.