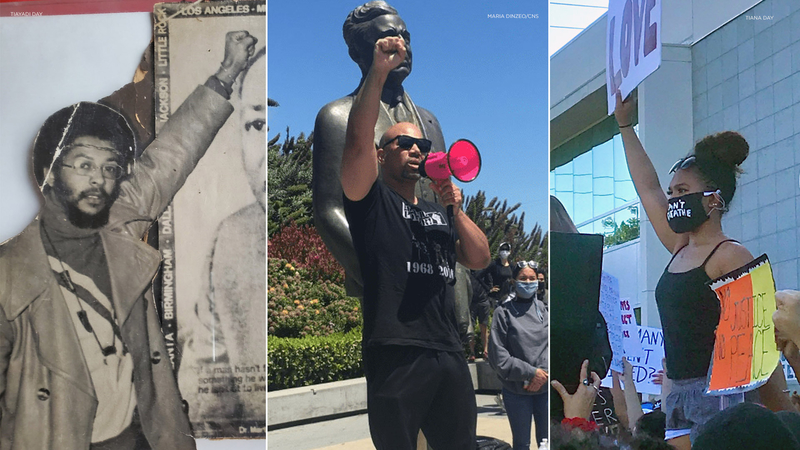 18 hours. That's all it took Tiana Day to go from a bystander to one of the leading voices of the Black Lives Matter movement.

Tiana was only 17 when she volunteered on a Friday in June to lead a march across the Golden Gate Bridge the very next day. She expected a few dozen people, instead, thousands showed up.

"When I was marching I just felt a mass amount of empowerment," she recalled. "Everyone's voice in this movement matters."

It was a moment of uprising that has been repeating itself since California's founding - from the Bear Flag Rebellion in 1846 to the free speech movement of the 1960s. California is where the fight for civil rights has led to groups like the Black Panthers and the United Farm Workers.

For the teen, the march brought to light a part of her family's history with activism that she didn't know existed.

After the march, her father revealed he had been an activist when he was in college in the 1990s.

Tiayadi Day was a student at San Jose State when a jury acquitted four Los Angeles police officers seen beating Rodney King after a high-speed chase. He led protest marches and then became part of a grassroots organization that helped shape reforms in the San Jose Police Department.

He had never told his daughter about his activism.

"I never talked to her about racial inequalities," said the elder Day. "I tried to allow things to come about naturally. Being a minority, you are going to come into contact with racism."

It was a decision similar to one his father, Dennis Day, took decades earlier.

"My dad worked a lot with the Black Panther Party. We never spoke about his activism," said Tiayadi Day. "Growing up Black in America, when you feel like you've been discriminated against, it hurts to your bone."

Allissa Richardson, assistant professor of journalism at the University of Southern California, points at two shameful moments in California's history as watershed moments in the Black Lives Matter movement.

The first was the Rodney King beating video, which showed the world the brutality of some police officers. The other was the Oscar Grant shooting in Oakland, which was one of the first times a police shooting was recorded on a cellphone.

"I think one of the more lasting impacts of the Black Lives Matter protests is all the ways that we're questioning what systemic racism looks like," said Richardson. "So we're having so many people who are now questioning am I being racist at work or are the words that I'm using inappropriate."

Richardson sees a shift in sensibilities towards people of color happening in California, where activists are taking their anger from the streets to local governments and enacting change through legislation and civic engagement.

"California is a leader not just in diversity, but in transformational activism," she said. "You have a combination of student efforts that have banded together with labor groups that make the activist atmosphere a bit more special and gives it more power."

After feeling empowered from her activism, Tiana Day started Youth Advocates for Change, a nonprofit that aims to give teenagers who are passionate about social justice a larger voice and inspire local action.

"Every time I get in front of a camera, I hope some kid sees this and thinks 'I can do that too.'"

California Dreaming: The Future of the Golden State | Part 2

Despite some companies leaving, CA is still tech capital

Film and TV business is part of California's fabric