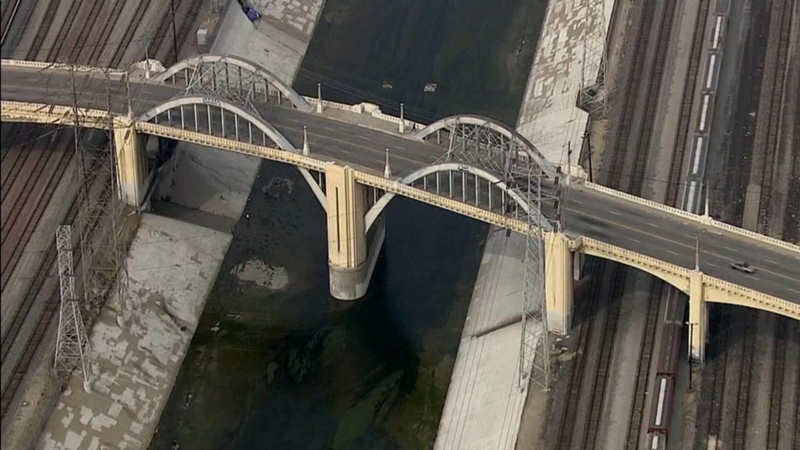 LOS ANGELES (KABC) -- Thousands gathered on the Sixth Street Bridge on Saturday for a farewell celebration of the L.A. landmark expected to undergo reconstruction in 2016.

The 3,500-foot concrete bridge that connects the downtown Arts District to Boyle Heights is expected to be torn down in January because of "concrete cancer," an alkali-silica reaction that threatens the long-term integrity of the bridge.

Councilmember Jose Huizar represents both communities connected by the structure and was the driving force in pushing for the international design competition that resulted in the Michael Maltzan-designed bridge being selected to replace the old one.

A $428-million project for the new Sixth Street Bridge is expected to be completed in 2018 and opened in 2019. Officials say it will look similar to the original.

The historic bridge, built in 1932, is arguably Los Angeles' most well-known bridge as it has been the scene of many Hollywood films, commercials and music videos.

"Everybody knows Sixth Street Bridge, from photographers to Hollywood movies," said Jaime Valdez, an El Monte resident that joined in the celebration. "We all know it from that and it's just a really special place to all of us that were born here, in Los Angeles."

The celebration was expected to end with a fireworks show overlooking the historic structure for the last time in its original form.

"It's going to be missed but better things are going to come, so, I'm looking forward to it."
Related topics:
societydowntown lalos angelesfestivalconstructionbridgecommunity
Copyright © 2021 KABC-TV. All Rights Reserved.
More Videos
From CNN Newsource affiliates
TOP STORIES