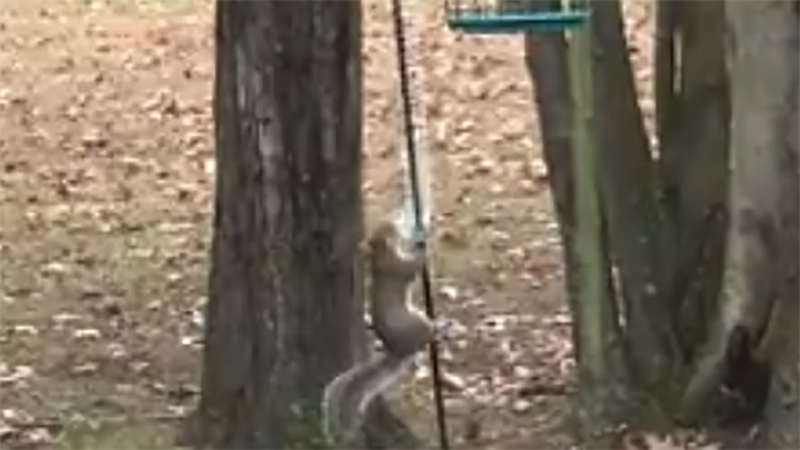 OWENSBORO, KY -- Squirrels are notorious for their fantastic climbing abilities. They are quick and will go to great heights to get nuts, seeds and other food sources. So you'll understand when homeowners have a tough time trying to prevent them from getting in their things.

A Kentucky woman may have found a solution to stop the pesky rodents.

Jan Siems Catron said that she had been dealing with up to seven squirrels eating out of the bird feeder in her yard. She said the squirrels have been eating through the bottom of the feeder.

"If I put seed in the feeder, the squirrels always come out. I have tried several different types of squirrel-proof bird feeders and none have worked," Catron said.

Catron said that one day she and her daughter were Christmas shopping for her grandchildren. They were initially planning on getting a Rubik's Cube for one of the kids, but instead found the Slinky.

"The Slinky never made it under the tree," Catron said.

She said the idea of using the Slinky to keep the squirrels away just popped into her head, so she went with it and hung the toy from the feeder.

Catron saw one of the squirrels in her yard, so she decided to see how well the Slinky would work and captured the encounter on video and posted it on Facebook.

"The squirrels tried to climb the pole for two days. After they fell off many times, they gave up," Catron said.

After several failed attempts, some of the squirrels found another way to avoid the Slinky, and Catron said she gives them credit for trying so hard to get to the feeder.

"A few are now trying to jump from the tree to the top of the bird feeder. If they land it, I let them stay on the feeder for a snack. I figure if they work that hard, they have earned it," Catron said.

Catron's Facebook video has reached more than 32 million views since she shared it on Dec. 13.