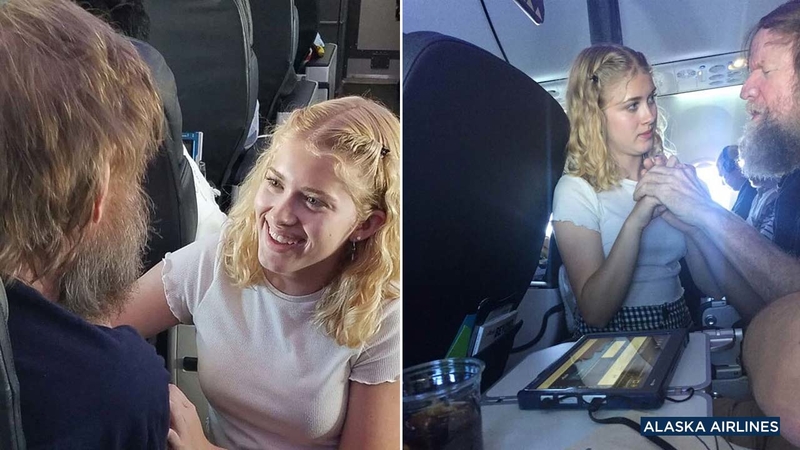 Teen steps up to help blind and deaf passenger on flight

LOS ANGELES (KABC) -- A local teenager's moving act of kindness has gone viral after the 15-year-old comforted a blind and deaf man on a flight by using sign language.

Clara Daly did not anticipate a touching moment she experienced during a recent flight would garner so much attention online.

When Alaska Airlines flight attendants asked if anyone on the plane knew American Sign Language, she stepped up. She said she was scared she might communicate the wrong message because she, herself, is dyslexic.

Clara learned that Tim Cook, a passenger on the plane, is deaf and blind.

"They needed someone to finger spell or just do the alphabet into his hands so he could read it and then respond," said Daly.

So she did -- letter by letter.

"I knelt down, I put my hands inside his hands. I started asking, 'How are you?' 'Are you okay?' 'Do you need anything?' And he told me that he needed some water," Clara said.

The teen kept Cook company for about an hour.

"He told me how he used to be a travel salesman before he went fully deaf and blind," she recalled.

Fellow passenger Lynette Scribner was sitting in the same row and shared the story on Facebook. It got more than 1 million likes and tens of thousands of comments.

For his part, Cook said the flight is the best trip he's ever taken.

It seems Clara was meant to be there for him -- she and her mom ended up on the flight only because their original flight was canceled.

"It's good to make someone feel like they're not as alone as they might have thought that they were," Clara said.

Clara volunteers at a retirement facility, plans on majoring in political science and becoming a senator.