Owens put out a tweet saying the NFL and commissioner Roger Goodell owe Kaepernick an apology and should help him return to the league.
KABC 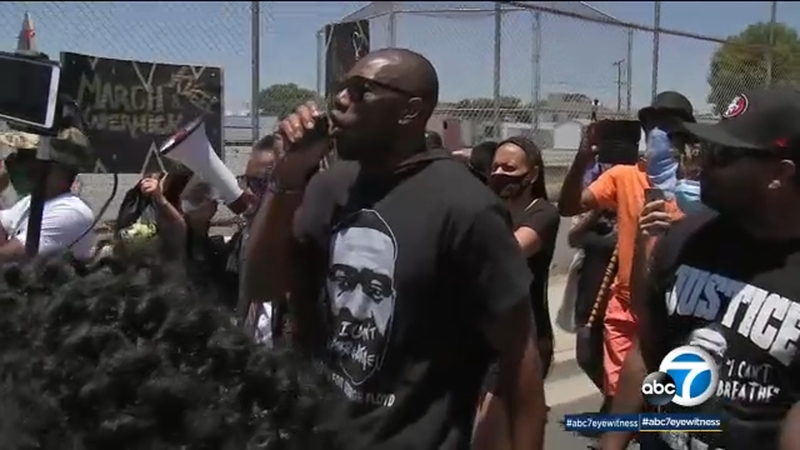 INGLEWOOD, Calif. (KABC) -- NFL Hall of Fame Receiver Terrell Owens organized a rally held Thursday in Inglewood with focus on Colin Kaepernick and how the NFL deals with racism.

"The NFL, Roger Goodell, they owe Colin Kaepernick an apology," Owens said at the rally.

A group of people joined Owens at the rally he organized demanding the NFL give Kaepernick a chance at a comeback.

On Wednesday, Owens shared a flyer on Twitter calling for a "March & Kneel" rally starting at the corner of Manchester and Prairie avenues, right in front of the LA Forum.

Owens put out a tweet saying the NFL and commissioner Roger Goodell owe Kaepernick an apology and should help him return to the league.

The @NFL & Roger Goodell owes @Kaepernick7
an apology along with his job back which is long OVERDUE.
This march is about bringing global awareness to the systemic racism that the NFL & @nflcommish still displays toward Kap!
Go to: https://t.co/07r7JfUn2Z to sign the petition pic.twitter.com/Ik7pdqQRw3

Kaepernick was widely criticized for taking a knee during the National Anthem. He was a quarterback that led the San Francisco 49ers to a Super Bowl appearance but has gone unsigned by any team since kneeling to protest police brutality in 2017.

Earlier this month, Goodell said the NFL was wrong for not listening to players and encouraged them to peacefully protest. But he failed to say anything about Kaepernick and his peaceful protests.

In Sept. 2018, it was announced that Colin Kaepernick would be one of the faces of a new Nike advertising campaign commemorating the brand's 30th anniversary of the "Just Do It" motto.