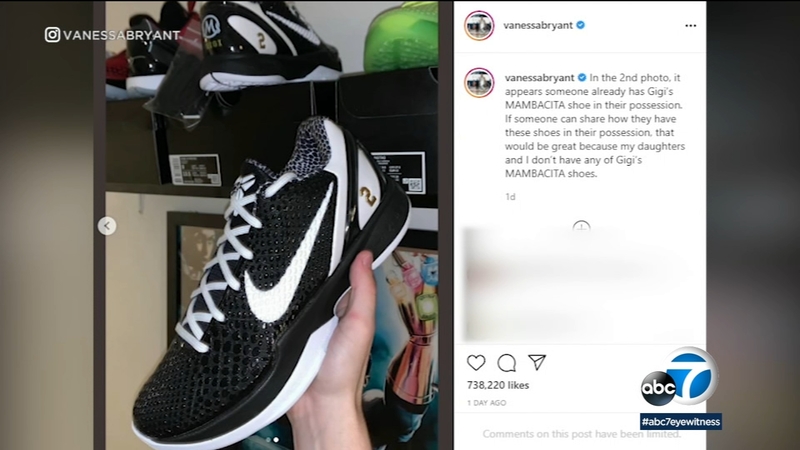 LOS ANGELES (CNS) -- Vanessa Bryant lashed out on social media last week over the apparent release of a shoe she designed in honor of her late daughter, Gianna, but never approved for sale or release.

On her Instagram page, Vanessa Bryant posted a photo of someone holding one of the shoes, which even she doesn't have.

"This is a shoe I worked on in honor of my daughter, Gianna,'' Bryant wrote. "It was going to be called the 'Mambacita' shoe as an exclusive
black and white colorway on her daddy's shoes. I picked the colors in honor of her uniform, the number 2 she wore just like her uniform, the inside pattern, Kobe and Gigi on the back in gold instead of Kobe's signature, the inside shoe details (butterfly, wings, halo), etc.

"The 'Mambacita' shoes are NOT approved for sale. I wanted it to be sold to honor my daughter with ALL of the proceeds benefiting our @mambamambacitasports foundation, but I did not re-sign the Nike contract and decided not to sell these shoes. The Mambacita shoes were not approved to be made in the first place. Nike has NOT sent any of these pairs to me and my girls. I do not know how someone else has their hands on shoes I designed in honor of my daughter, Gigi, and we don't. I hope these shoes did not get sold @nike.''

Los Angeles County attorneys contend Vanessa Bryant has no legal basis to sue four sheriff's deputies alleged to have shared unauthorized photos taken at the site of the helicopter crash that killed Kobe Bryant, his daughter and seven others, according to court papers.

There was no immediate response to City News Service for a request for comment from Nike.

Bryant asked for help determining how anyone was able to obtain the shoes, saying, "... that would be great because my daughters and I don't have any of Gigi's Mambacita shoes.''

Another post she shared included a tweet suggesting that a retailer called Foot Patrol in the United Kingdom had "released a few pairs early by accident.''

Kobe Bryant and Gianna, 13, died with seven other people in a Calabasas helicopter crash in January 2020.