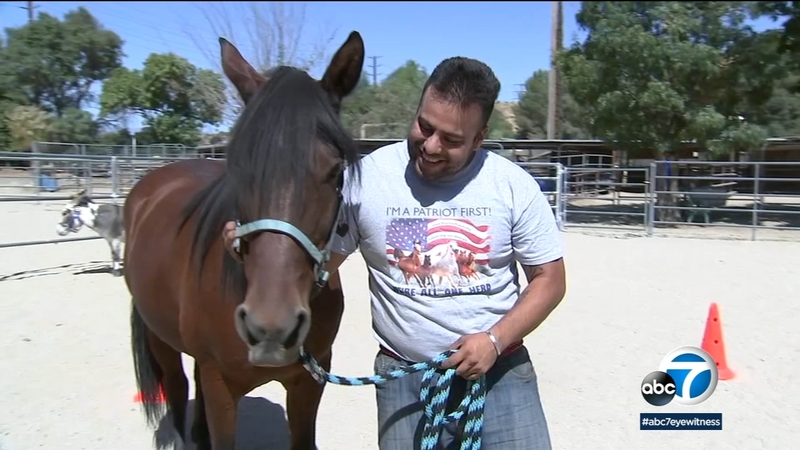 Veterans Turn to Horse Therapy to Treat Their PTSD

SANTA CLARITA, Calif. (KABC) -- Army veteran Manny Perdomo served eight years in the military, which included tours in Iraq and Afghanistan. When he left the service, he was diagnosed with PTSD.

"Before I used to be able to smile and socialize a lot, be out and about with family and friends. A lot of outings and just a very positive outlook on life. After my tours, my life just kind of came crumbling down. I went into isolation, depression, drinking," Perdomo said.

Perdomo says he was ready to give up, but he was then introduced to a different type of therapy, one where the therapist is a horse.

"I talk to them. I've been able to vent with them one on one. The horse has my back, and the horse knows what I'm feeling when another human can't relate," said Perdomo.

"They can move a 1,200 pound animal around now," said Katie Ryan, a psychotherapist who volunteers for Blue Star Ranch. "That's not sitting in an office and talking about your feelings. That's moving an animal, and so then they have confidence that they can go out into the world and go into a grocery story and be a civilian again."

The nonprofit Blue Star Ranch was founded in 2014 by Nancy Zhe, who wanted to address the mental crisis among veterans. So far, 35 veterans have been through the 10-session program.

"The biggest need is mental health," said Nancy Zhe. "We have 22 suicides a day. Our mission is to lower the suicide rate and the family divorce rate."

Perdomo says he was skeptical at first, but now believes horse therapy has done more to address his post-traumatic stress disorder than any other form of treatment.

"My anxiety levels have gone way down. My nightmares -- I wish they were gone, but they've gone down. I've been able to reconnect with my wife, with my children, repair bonds and relationships that were shattered because of my PTSD," said Perdomo.