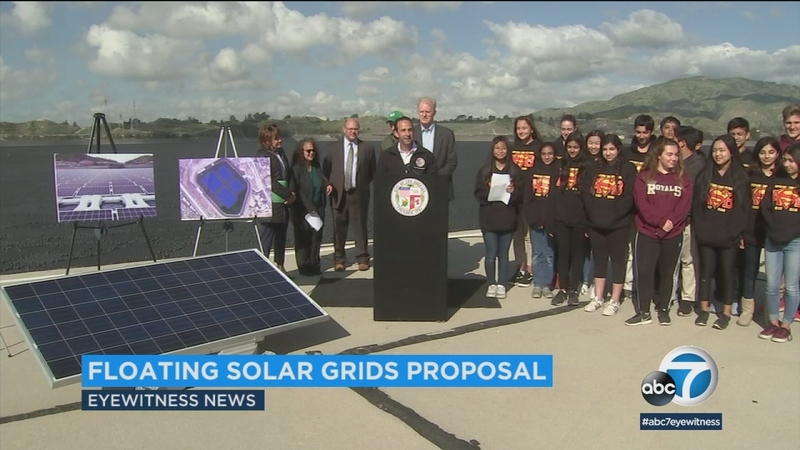 "This is a technology that is already being used in other countries from China and Japan," said Englander, of District 12. "The pilot that I'm proposing calls for an initial installation of 11.6 megawatts of solar power on our reservoirs, serving electrical needs for 3,190 homes per year."

He was joined by actors, students and clean energy activists at a news conference who feel L.A. is in a unique position because our weather and geography would support such a proposal.

"It's good for the environment, and it's good for your pocket book to do this, " said actor Ed Begley Jr., who has appeared in countless films and television shows.

The news conference was held at Lower Van Norman Reservoir in Sylmar, located just off Interstate 5. It is one of several proposed sites for the pilot project. At this location, the L.A. Department of Water and Power said the solar panels would float amid the millions of tiny black balls, known as "shade balls," that protect the reservoir's water quality.

"If we can protect water, protect water quality, protect evaporation and at the same time leverage the space for solar needs to help our plans for the future, we have a great opportunity," said LADWP Chief Operation Officer Marty Adams.

It also eliminates the cost of finding land for a large-scale solar panel farm. However, Englander couldn't tell ABC7 exactly how much this pilot program to put solar panels in a reservoir would cost the city.

"What we're looking at is creating some kind of public-private partnership with an opportunity for some vendors to get involved in a power purchase agreement where we're not actually spending any money, or very little out in front of it, and we're getting it all in return because we're generating our own power," said Englander.