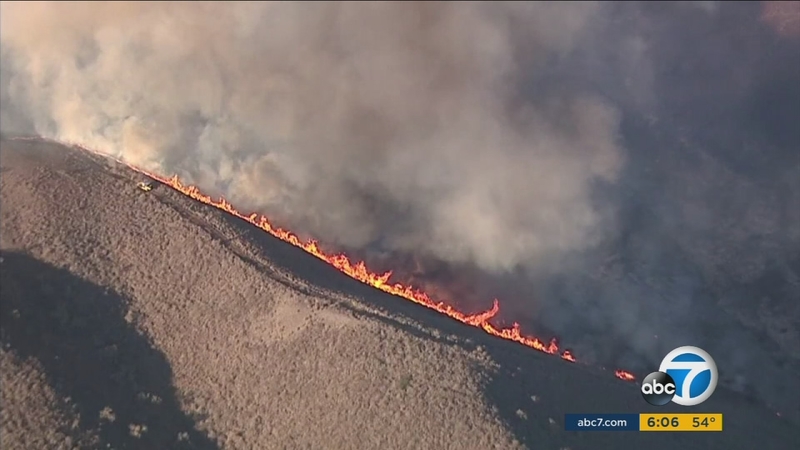 The fast-moving blaze scorched hillsides near the beach and posed a threat to oil, gas, power and railroads. Santa Barbara County Office of Emergency Management officials said the fire was at 60 percent containment by nightfall.

Ventura County Fire Department officials said the cause of the blaze was believed to be due to a downed power line in the area.

During a mid-morning press conference, fire officials estimated firefighters would be working on the blaze for the next three days.

The fire started around 10:30 p.m. Friday, burning about 100 acres in the 3000 block of West Pacific Coast Highway. According to Ventura County Fire officials, the flames were visible about 150 feet from the sand.

More than 600 firefighters from various agencies, including Los Angeles County Fire Department and Cal Fire, worked to quell the flames along with help from helicopter water drops. The Orange County Fire Authority sent over a Type 3 Strike Team, consisting of five brush engines and 19 firefighters.


Strong northwest winds and dry, drought-stricken vegetation caused the fire to quickly grow to 900 acres by 5 a.m. Saturday, prompting mandatory evacuations for the Solimar Beach area. The blaze threatened about 35 homes in the community.

Residents living in Faria Beach and campers at Emma Woods State Beach were placed under voluntary evacuations. The Red Cross set up a temporary shelter in Carpinteria at the Veteran's Memorial Building, 941 Walnut Avenue. All evacuations orders were later lifted around 5 p.m., and Solimar residents were allowed to return to their homes. However, Emma Woods campgrounds remained closed.

The 101 Freeway was shut down in both directions - northbound at State Route 33 and southbound at Bates Road. The Pacific Coast Highway was closed in both directions from the State Beaches exit to Seacliff Road temporarily, and reopened around 5 p.m., according to Santa Barbara County officials.

Caltrans conducted a survey on the damage to the northbound and southbound lanes of the 101 Freeway. VCFD Fire Battalion Chief Norman Plott said some freeway medians were burned and melted from the flames that hopped across the lanes.

The California Highway Patrol reopened both directions of the 101 Freeway shortly before 2 p.m. Saturday, but with chances for strong winds starting up again those plans could change.

"Any openings that do happen is subject to being closed again if the fire changes direction," Plott said.