Family of man gunned down in South LA pleads for justice, end to gun violence 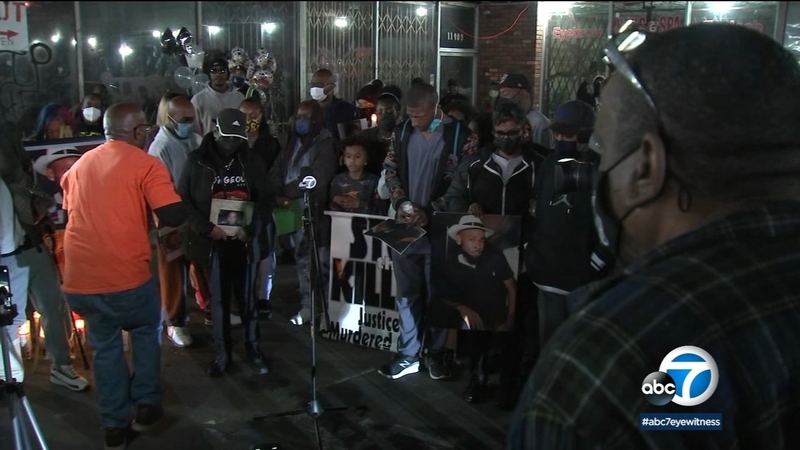 LOS ANGELES (KABC) -- Monday saw an emotional plea from a heartbroken family, not only to find their loved one's killer, but also to stop the violence that has been plaguing their community, and the many lives lost to gun violence.

"I loved my brother. He was a good father. And please, just pray for our family because we're really hurting," said Fredrick Sennie Jr.

A heartbroken brother pled for the public's help catching the killer of 33-year-old Reginald Thompson, known as Reggie, who was gunned down Jan. 11 in the parking lot of a strip mall in Vermont Avenue and Imperial Highway in South Los Angeles as he talked with a friend.

"Four cowards got out of the vehicle, and they opened fire, fatally wounding my son. He didn't do anything. He was a loving man," said Caren Stephens.

Thompson's family says he was not a gang member, and says he was a devoted dad to his young son and daughter. On Monday, loved ones and community activists gathered at the scene of the murder to remember another life lost to gun violence.

The call to end the violence comes just 24 hours after four people were murdered at a house party in Inglewood, including two sisters.

"I just want the violence to stop because we are really hurting," said Reggie's father, Reginald Thompson Sr. "We really need to catch our killer."

As the search continues for Thompson's killers, his devastated mother says she doesn't want anyone else to go through such a horrific loss and is pleading for justice for her son.

Investigators say there's no solid description of any of the suspects.