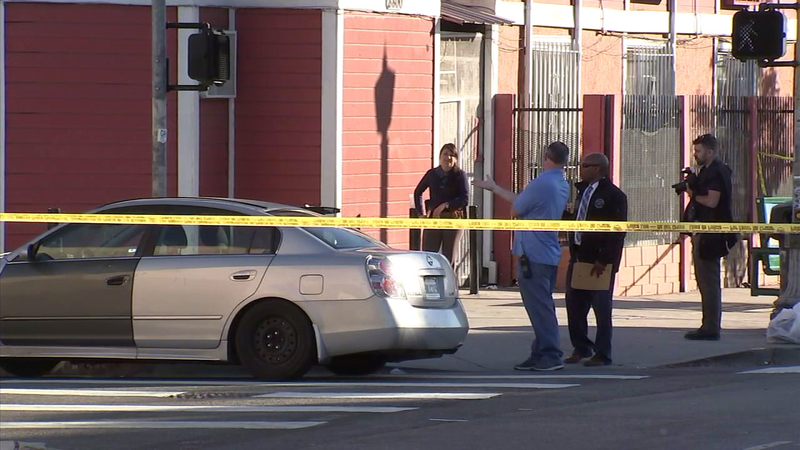 SOUTH LOS ANGELES (KABC) -- One woman was killed and another injured when they were caught in the crossfire of a shooting in South Los Angeles, police said.

The two women were described as innocent bystanders in what may have been a gang-related shooting.

The shooting happened just after 12 p.m. Monday in the area of Broadway and 88th Street, just east of the 110 Freeway.

Police say a man, possibly in his 40s, approached the scene and fired multiple shots, hitting two women. He fled the area in unknown type of vehicle. Witnesses reported hearing about six or seven shots.

One woman believed to be 48 years old was struck multiple times. She was transported to a local hospital and pronounced dead there.

Another women, around 47, was grazed by gunfire and was treated and released at the scene.

Police say the two women had pulled over in their car and were checking on something that needed to be fixed when the shooting began. There were other people on the street at the time who may have been the intended targets.

"The victim does not appear to be associated with any type of gang activity but the shooting appears to be gang-related in the aspect of how it occurred," said Lt. Byron Roberts. "It does not look like she was the intended target of the shooter but she appears to be an innocent victim that was caught up in this particular incident."
Report a correction or typo
Related topics:
south los angelesgang violencegun violenceshooting
Copyright © 2022 KABC Television, LLC. All rights reserved.
TOP STORIES
3 local teens identified as victims in fatal Pasadena crash
Missing diver's body found off Huntington Beach coast
Stolen WeHo Frenchie recovered in Philadelphia, reunited with owner
Nurse in deadly downtown LA attack remembered by friends, neighbors
Arrests in fatal stabbing of man who tried to break up fight in LA
Rams beat Cardinals 34-11 to advance in the NFL playoffs
Omicron surge hasn't peaked nationwide: US surgeon general
Show More
LA Zoo honors Betty White on her 100th birthday
Dozens of LAX flights delayed, canceled due to East Coast storm
MLK Day: Physicians reflect on efforts to combat health care inequity
Stafford, Murray seek first playoff wins when Cardinals visit LA
1 killed in fiery multi-vehicle crash on 105 Freeway in Paramount
More TOP STORIES News