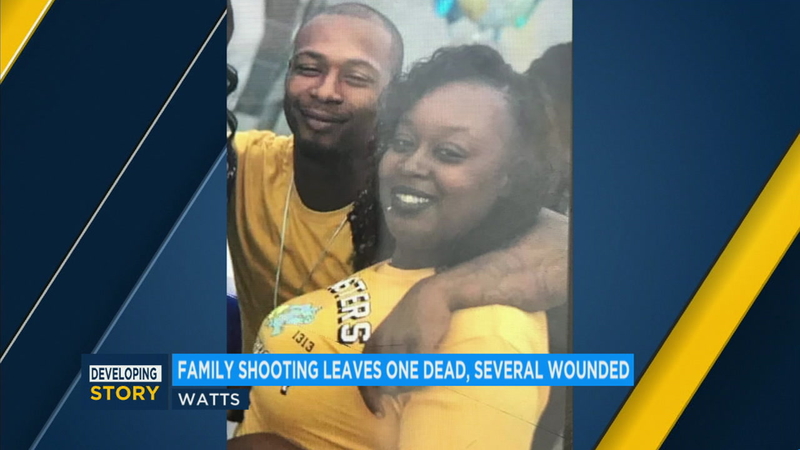 WATTS, LOS ANGELES (KABC) -- A man is accused of shooting members of his own family and fatally shooting his girlfriend before police opened fire on the suspect in Watts, according to family members.

A radio call at 5:40 a.m. Sunday prompted a patrol unit to respond to the area of 95th Street and Defiance Avenue, where officers carried out multiple victims and confronted the armed suspect before an officer-involved shooting occurred, according to the Los Angeles Police Department.

Police confirmed one woman was pronounced dead at the scene. Relatives say the suspect, his uncle and grandmother were hospitalized in critical condition. A 5-year-old also suffered a minor injury.

Police said it's not clear whether the suspect was wounded by police gunfire or if it was a self-inflicted wound. No officers were injured.

Today in Watts around 5:40 a.m Southeast Div. patrol responded to a radio call, ofcr engaged an armed suspect and an OIS occurred. Ofcrs entered the residence and located multiple individuals suffering from gunfire. Victs transported to nearby hospital. No ofcrs were injured.

Loved ones identified the victim as 33-year-old Shaneca Hughes. Friends and family of the girlfriend said the couple had a violent and troubled relationship.

In an interview at the scene, a woman who identified herself as the gunman's mother told reporters that her son called her moments after opening fire on members of their family.

"All he did was call and told me, he said, 'Mom, I just killed somebody,'" the woman, who gave her name only as Cheryl, said.

"What? Wait a minute, hold up," she replied. "Let me go get me a beer or two 'cause I know you didn't say what you just said."

She went on to say she has no idea what happened.