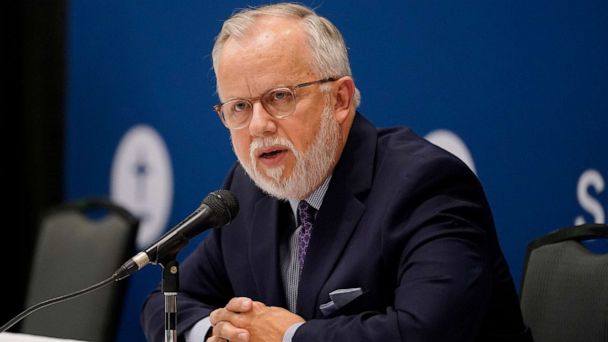 "The rumors were always out there that these things were happening," Litton said on ABC News Live on Tuesday. "There were several attempts made at our convention meetings to bring this to light. But they were very successfully pushed down."

In a 288-page report, investigators found that survivors and concerned Southern Baptists continuously shared allegations with the executive committee "only to be met, time and time again, with resistance, stonewalling, and even outright hostility from some within the EC."

Sexual abuse in Southern Baptist churches was spotlighted in 2019 by the Houston Chronicle and San Antonio Express-News in a report that documented hundreds of cases. Several of the accused perpetrators remained in ministry.

Following the report, thousands of delegates voted overwhelmingly to create a task force charged with overseeing the third-party review.

"We had to go through an arduous process of removing all legal barriers so that that investigation would be thorough and complete," Litton told ABC News. "I believe what we have is a revealing -- a very rare revealing -- from the grassroots Southern Baptists to say what's really going on here."

The report found that SBC leaders were concerned about church liability and its reputation and ignored concerns "even if it meant that convicted molesters continued in ministry with no notice or warning to their current church or congregation."

Now, Litton and church leaders must figure out how to implement the recommendations from Guidepost.

He said leaders plan to convene at the SBC's annual meeting in Anaheim in June, present solutions to the body for a vote, and address how to make the necessary systemic changes.

Investigators recommend creating and maintaining an "Offender Information System" to alert the community to known offenders, as well as providing a "Resource Toolbox including protocols, training, education, and practical information."

"The question is: how will we respond to that reality and what will we do to change the culture of Southern Baptist?" Litton said.

He said churchgoers are shocked, angry and hurt.

"The scripture is very clear on this," Litton said. "Jesus said that what's whispered in the backroom will be shouted from the rooftop. What sits in darkness will be revealed in the light. And so this is where we're at, at this moment."
Report a correction or typo
Related topics:
abc newsnational
Copyright © 2022 ABC News Internet Ventures.
TOP STORIES
New California laws on bars, ghost guns, schools taking effect
Free gas giveaway leads to massive traffic jam in Compton
Minimum wage in LA increases to $16.04 starting Friday
Here's what to know about the end of CA's eviction moratorium
California late start law aims to make school less of a yawn
LA County could hit 'high' COVID level in July, prompt return of masks
2nd visitor in 3 days gored by Yellowstone park bison
Show More
Hit-and-run driver slams into woman walking her dogs in Westminster
LAX expected to be second busiest US airport over July 4th weekend
Family member beats shark to free teen girl from its jaws
Growing solar industry creating pathway out of poverty for many
California sets nation's toughest plastics reduction rules
More TOP STORIES News