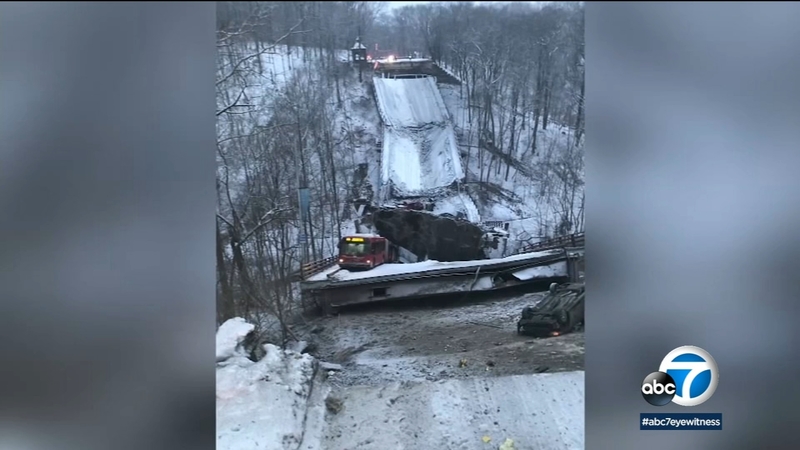 SAN BERNARDINO, Calif. (KABC) -- State and local leaders met to discuss what's being done to improve aging roads and other infrastructure in Southern California, on the same day several people were injured when a decades-old bridge in Pennsylvania collapsed.

Images out of Pittsburgh are striking after a bridge that was more than 50 years old collapsed, and a transit bus was left hanging. All of this ironically happened only hours before President Joe Biden was set to arrive in the city to talk about infrastructure.

"I didn't realize that there are literally more bridges in Pittsburgh than any other city in the world," said Biden.

According to the U.S. Transportation Department, the bridge that collapsed had been rated in poor condition for more than 10 years.

The president said it's a perfect example of how far behind our nation has fallen with infrastructure.

"We're going to fix them all, not a joke, this is going to be a gigantic change, 43K nationwide, and we're sending the money," Biden said.

The $1.2 trillion-dollar infrastructure plan is also being discussed locally.

In San Bernardino Friday, a roundtable discussion was hosted by Congressman Pete Aguilar, D-31st District, regarding what to do with the money.

"We want to make sure that we're all talking about the bipartisan Infrastructure Improvement and Jobs Act that President Biden and Vice President Harris put forward, what it means to San Bernardino County, in addition to building off the American Rescue Plan, and the local dollars that flow into our communities," said Aguilar.

Top priorities for local leaders include, fixing up Inland Empire roads that are beat up by all the truck traffic, as well as improving internet service, and installing more electric-car charging stations.