2021 NBA playoffs: What's real and what's not in the conference semifinals 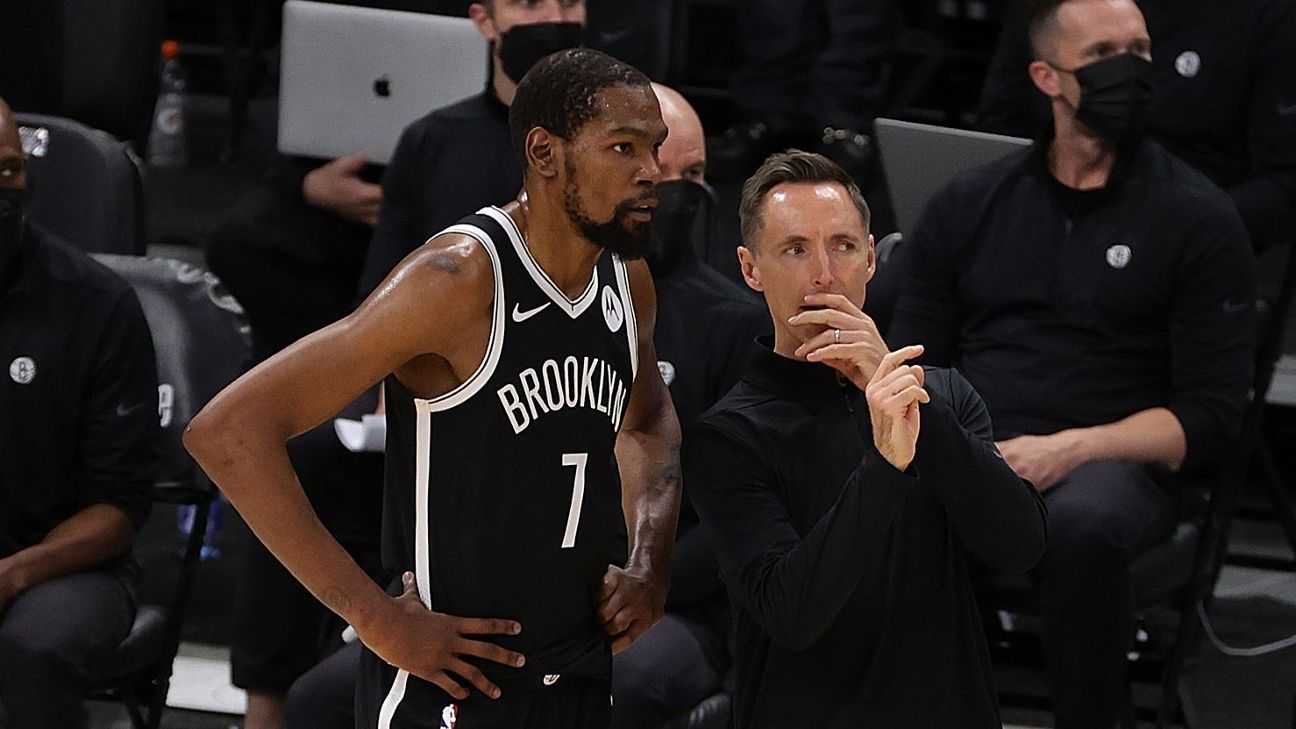 While the Phoenix Suns put their feet up after an impressive sweep of MVP Nikola Jokic and the Denver Nuggets, six teams continue to fight for the three remaining spots in the NBA conference finals.

No matchup has more storylines than Brooklyn Nets vs. Milwaukee Bucks, which is locked at 2-2 heading into Tuesday's Game 5. Should the Nets still be considered NBA title contenders after Kyrie Irving's ankle sprain added to Brooklyn's injury woes?


The Atlanta Hawks held Joel Embiid in check to tie their series at 2-2 with the Philadelphia 76ers. Can the Hawks continue to limit the Sixers' ailing big man for the rest of the series?

The Utah Jazz fell to the LA Clippers in Game 4 to tie their series at 2-2, butDonovan Mitchellcontinues to rack up points. Is he playing the best basketball of any guard remaining in the playoffs?

Our panel of NBA experts is breaking down the biggest trends we're seeing so far in the conference semifinals.

MORE: Matchups, schedules and news for every series

Real or not: The Nets' title chances after Kyrie Irving's ankle injury

NOT REAL.An essential part of any path to an NBA championship is luck. Sometimes it comes in the form of a favorable bounce; other times it simply means a team avoids running into an untimely injury over the course of trying to win 16 postseason games.

The Nets, unfortunately, haven't been lucky. They spent all year dealing with injuries to their Big Three of James Harden, Kyrie Irving and Kevin Durant. Including the playoffs, they've played only 15 games together.

And with Harden suffering a recurrence of the hamstring injury that cost him virtually all of the final weeks of the regular season just 47 seconds into the Eastern Conference semifinals against Milwaukee, and Irving spraining his right ankle Sundayin Brooklyn -- Irving is out for Game 5, but Harden has been upgraded to questionable -- they might not play together again this season.

The beauty in having three stars of this caliber on one team is that an injury to one of them isn't enough to sink your team. Brooklyn showed that by eviscerating Milwaukee without Harden in Games 1 and 2. But even for Durant, arguably the greatest scorer this game has ever seen, trying to beat Milwaukee two out of three times without both of his running mates is a very tall task.

It's unlikely that P.J. Tucker will be able to remain quite as physical as he was guarding Durant in Games 3 and 4, when Durant shot an uncharacteristic 20-for-53 from the field. But even if that normalizes moving forward, replacing Harden and Irving with some combination of Mike James, Landry Shamet and Bruce Brown simply isn't going to cut it.

Now, if either Harden or Irving -- or both -- can return before this series is over, the Nets will suddenly be a legitimate title threat once again. But if Durant remains on his own against the Bucks for the rest of this series, what seemed like a clear path to the NBA Finals a few days ago could instead become a rapid departure from the postseason.

Real or not: The Suns as the favorites to win the West

REAL. At least for now. The biggest advantage Phoenix has is that it has already secured a spot in the Western Conference finals, while the Clippers and Jazz battle for the other one -- at least through Game 6 -- while the Suns get to rest at home.

The other edge for Phoenix is one that proved crucial in a second-round sweep of the Nuggets: health. No Suns rotation player has missed a game because of injury in the playoffs, making them the outlier in a postseason defined by injuries to key contributors.

Paul was limited by a shoulder contusion in the first round but looked as good as ever against the Nuggets, torching them for 25.5 PPG and 10.3 APG. Paul's 63% shooting was his best in any playoff series and his 8.2 assist-turnover ratio was his best in a series since 2008.


Meanwhile, Utah is still without starting point guard Mike Conley due to a hamstring strain and has fellow All-Star guard Mitchell playing through an ankle injury. And while the Clippers are missing only center Serge Ibaka, their stars are logging huge minutes; Paul George and Kawhi Leonard have already played more than any Phoenix player has entering the conference finals.

At the same time, we should be careful not to read too much into the Suns' dominance over Denver. The Nuggets were ill-equipped to deal with Phoenix's spread pick-and-roll tactics,detailed last week by ESPN's Zach Lowe, and the absence of guard Jamal Murray made it difficult for Denver to keep up offensively. Either the Jazz or Clippers should be more capable of challenging the elbow jumpers on which Paul feasted against the Nuggets, and both teams are more complete offensively.

A matchup with Utah would be interesting, because the Jazz were the stronger team over the course of the regular season and would have home-court advantage, but the Suns won all three head-to-head meetings. Phoenix had less success against the Clippers, losing the first two meetings before winning April 28 with Kawhi sidelined.

I'm not sure yet whom I'd pick depending on the conference finals matchup, but before it's set, Phoenix is the most likely team to win the West.

Real or not: Atlanta's chances at slowing down Joel Embiid for the rest of the series

REAL. It has to be real, because the Hawks were the opponent when Embiid just had one of the worst halves in recent playoff history. In the defining moment of Monday's Game 4, when a layup could've put his team ahead in the final seconds, Embiid admitted he didn't have enough lift. It was obvious if you watched him repeatedly clang jumpers on the front of the rim.

Because Embiid hasn't missed any games in this series, it is easy to forget how serious of an injury he is dealing with. Playing through a minor meniscus injury isn't unheard of, but for a player with Embiid's injury history and the type of game he plays, it's truly remarkable. The guy hits the deck numerous times a game, and even if he is guilty of a few embellishments, there's a natural inclination to wonder whether he'll get up every time.

During Game 4, Embiid went to the locker room before halftime with trainers. No one was willing to publicly admit what was going on, but the results in the second half -- when Embiid went 0-for-12 from the floor -- spoke enough.

With games every other day the rest of the series, the game-time spring in Embiid's legs is likely more important than any defensive scheme the Hawks can deploy. Embiid's activity level during Games 1 and 2 -- when he routinely beat double-teams and Clint Capela even when Atlanta's center was in great defensive position -- was hard to comprehend considering Embiid had just been diagnosed with such an injury. Reality seems to be biting.

The issue is the 76ers will have a tough time reducing his load. Knowing that Embiid was laboring, and with Seth Curry and Tobias Harris having good offensive games and a recent history of being a good pick-and-roll tandem, Philly coach Doc Rivers still went to his center for the final shot.

The play worked, with the Hawks failing to handle it, but Embiid couldn't execute. That was a microcosm of Game 4, and it could end up being that way the rest of this series.

Real or not: Reggie Jackson as the No. 3 for the Clippers

NOT REAL.Jackson saved the Clippers in the first round against the Mavericks. But this team was constructed with Marcus Morris Sr.as the No. 3 option behind Kawhi Leonard and Paul George, and the Clippers are at their best when Morris is playing at that level. Morris is known for his toughness and frontcourt play, but he was fourth in the NBA in 3-point percentage this year (45.1). When he is rolling, defenders have to respect his shot from behind the arc, and it completely opens up the spacing for the rest of the offense.

Everything Jackson has given the Clippers in these playoffs has been a bonus. He was one of the last guys added to the roster and wasn't even promised a spot in the rotation. But he is healthy now and comfortable in his role, and he has always had a penchant for big games in the postseason. Assistant coach Chauncey Billups has been working with Jackson on his game this season, and Billups said he has "completely reinvented himself."


Jackson has always had the talent to have a run like this. He just hasn't been healthy enough or been on a team as good as this one. It's fun to see veteran players like this find such a good fit. But Morris needs to be the Clippers' No. 3 option if they're going to live up to the high expectations set for this team.

Real or not: Donovan Mitchell is the best guard in the conference semis

NOT REAL. We can stop the debate about whether Mitchell deserves to be considered a superstar. He has eliminated any doubt, proving again that he's capable of frequently taking over playoff games. Mitchell is averaging an efficient 32.9 PPG this postseason, causing the Clippers to scramble to find schematic solutions despite being stocked with guards and wings with reputations as defensive stoppers.

But the best guard still playing -- and available -- in these playoffs has already wrapped up his Western Conference semifinal series. He's resting his 36-year-old body, waiting on the Jazz-Clippers winner. And Chris Paul just reminded the world of how great he still is, conducting a point guard clinic in the Suns' sweep of the Nuggets.

Paul, whose arrival in Phoenix turned the Suns from a bubble success story with a promising young core to a real contender, controlled that series from start to finish. He averaged 25.5 points on shooting splits (.627/.750/1.000) that are absolutely ridiculous. He made 10.3 assists per game and committed a total of only five turnovers in the series.

That 8.2 assist-turnover ratio is the second best in a series since turnovers became an official stat, behind only Paul's 10.0 ratio from his first playoff series way back in 2008, according to ESPN Stats & Information research.

And that isn't even the most impressive CP3 stat from the series. Take a gander at his numbers from the four fourth quarters: 43 points, 10 assists, zero turnovers on 84% shooting from the floor.

Devin Booker, Paul's 24-year-old co-star, also belongs in this conversation. He certainly has hushed any talk about his lack of playoff experience, scoring a total of 81 points in his first two closeout games -- pretty solid proof of killer instinct.

But Booker rode shotgun in this series, with Paul steering the Suns into the conference finals, a destination Mitchell and the Jazz are still trying to reach. 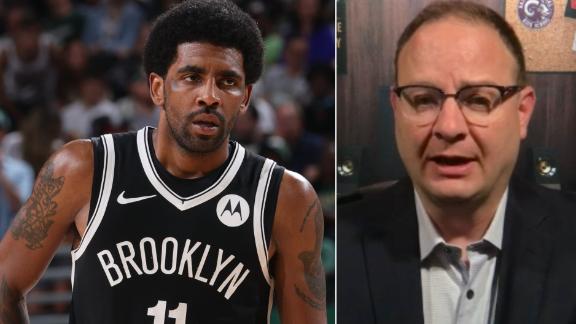 Will Kyrie play again in series vs. Bucks?
Adrian Wojnarowski says it is unclear to the Nets if Kyrie Irving will be available again in their series vs. the Bucks. 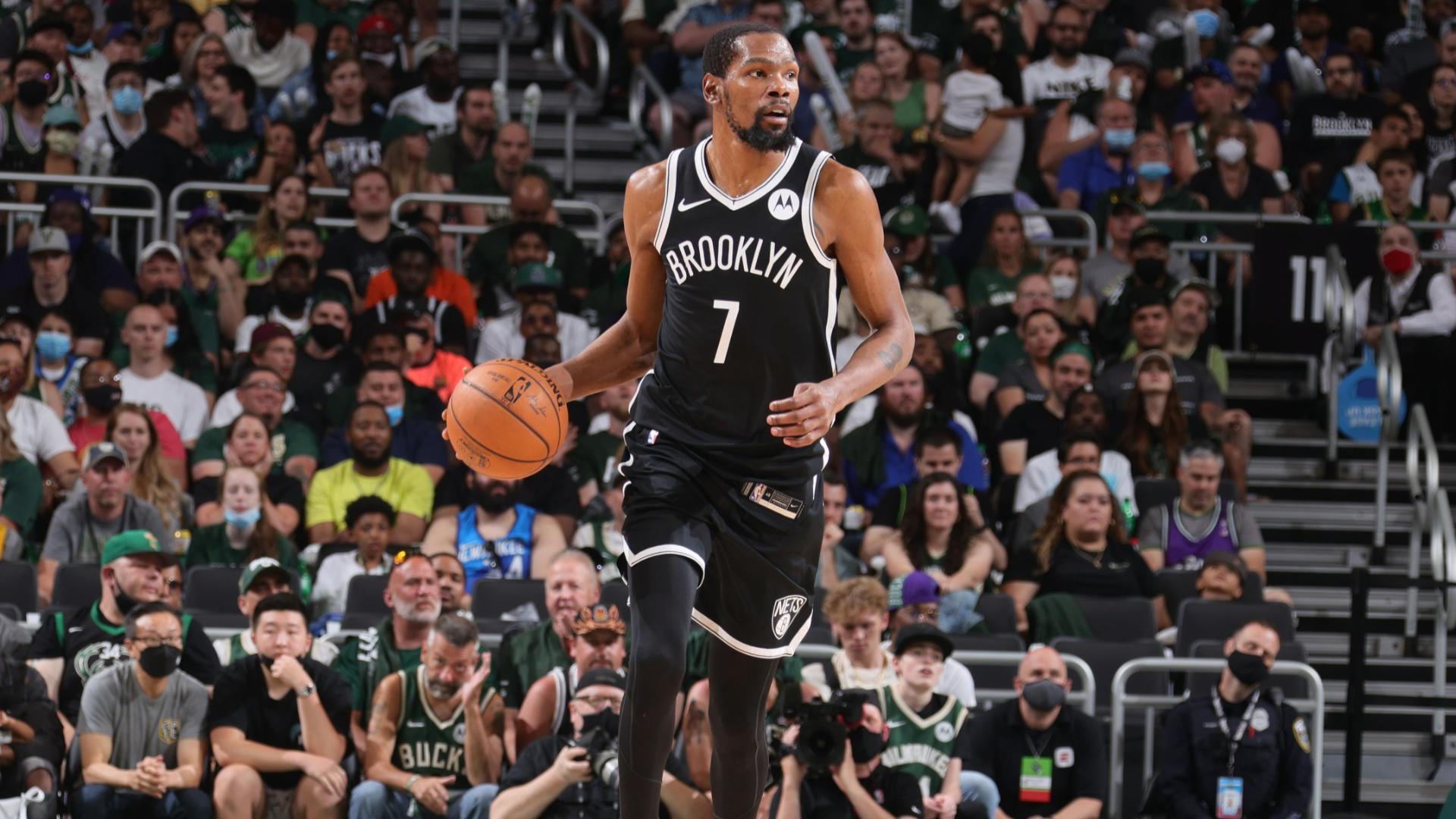 Can Durant lead Nets to win vs. Bucks without Irving or Harden?
Kendrick Perkins says Kevin Durant will have to show he is the best player in the world for the Nets to beat the Bucks without James Harden or Kyrie Irving. 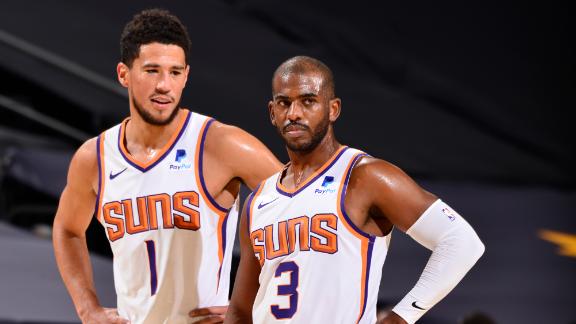 CP3, Booker put up 71 to send Suns to sweep of Nuggets, 1st WCF since 2010
Chris Paul and Devin Booker combine for 71 points to help the Suns steamroll their way into the Western Conference finals for the first time in 11 years. 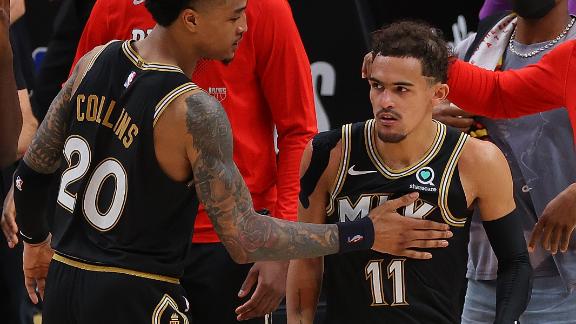 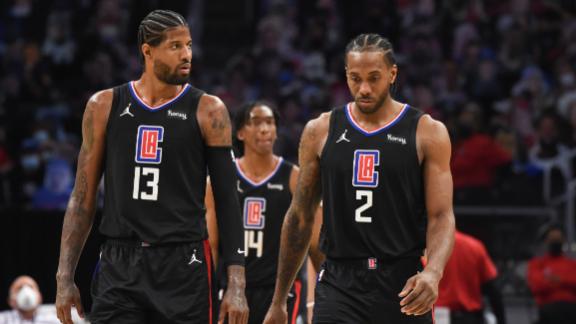 Kawhi, PG-13 combine for 62 points to help Clippers tie the series
Kawhi Leonard and Paul George both score 31 points to propel the Clippers to their second straight win vs. the Jazz. 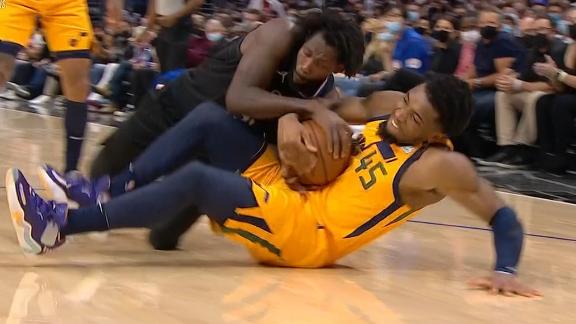