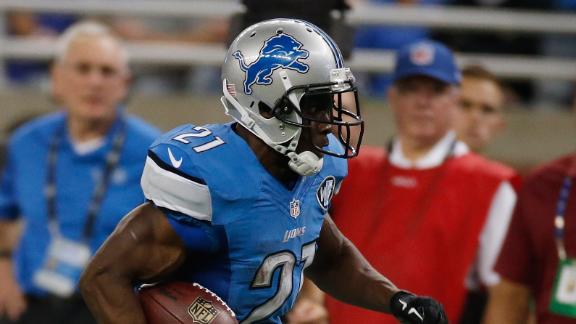 Reggie Bush is set to return to California.

The 49ers also announced Saturday the signing of cornerback Shareece Wright to a one-year deal.

Bush, who turned 30 on March 2, signed a four-year deal with the Lions in 2013 and was a 1,000-yard rusher for Detroit in his first season with the club. Bush couldn't stay healthy in 2014, though, dealing with a lingering ankle injury that started in Week 5 against Buffalo and never completely healed.

He played in 11 games last season with only 76 carries for 297 yards and two touchdowns. He also had 40 receptions for 253 yards. Bush continually tried to come back throughout the season but kept getting reinjured.

Bush was drafted by theNew Orleans Saintswith the No. 2 pick in the 2006 draft. Although he was a productive player when healthy and won the 2010 Super Bowl with the Saints, he never fully lived up to lofty expectations in New Orleans after a dazzling college career with the Trojans. He won the 2005 Heisman Trophy, but later voluntarily returned it after USC was sanctioned for NCAA violations during his time in college.

Bush played five seasons for the Saints, scoring 33 touchdowns in 60 games, before he moved on to theMiami Dolphinsin 2011. He rushed for a total of 2,072 yards and scored 15 TDs over two seasons in Miami before joining the Lions in 2013.

Wright started 14 games and played in a career-high 784 snaps for the San Diego Chargers in 2014, finishing sixth on the team in tackles with 60 and totaling 10 pass breakups.

The USC product showed improved play as a tackler and a defender. But he also failed to put up better numbers as a playmaker, with just one career interception in four seasons.

A third-round selection by the Chargers in 2011, Wright turns 28 in April. In four NFL seasons with the Chargers, Wright played in 44 games, starting 27 and finishing with 20 pass breakups.