5-on-5: Are the Clippers exposing any real Warriors problems? 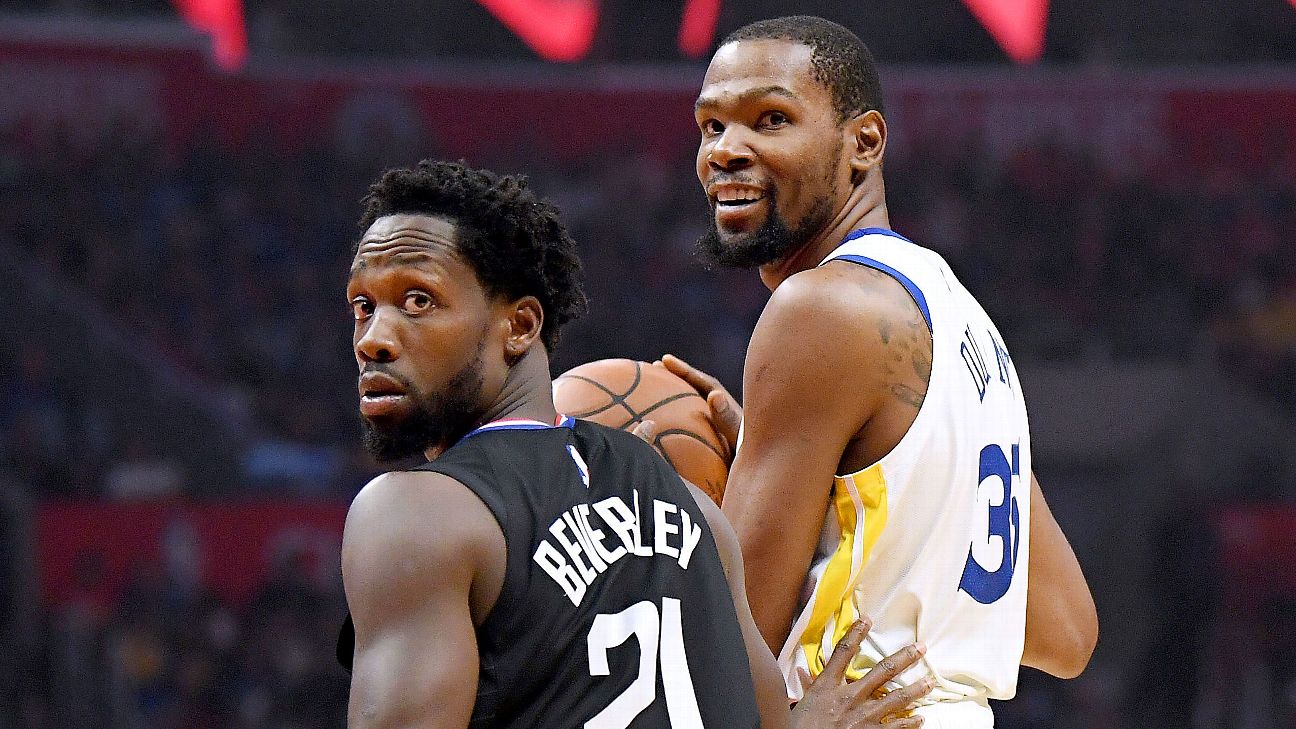 While the East gets ready for the conference semifinals this weekend, spots in the West are still up for grabs.

What are the biggest things to watch in Game 6 of theGolden State Warriors vs. theLA Clippers (10 p.m. ET, ESPN)? Do the Warriors have a defense problem, and are their title chances suddenly vulnerable?

Our NBA experts answer the big questions about this series and what it means for the rest of Golden State's run if the champs get out of Round 1.

1. Have you learned more about the Warriors or Clippers in this series?

Brian Windhorst, ESPN:Has to be the Clippers. It has been fantastic to watch Lou Williams and Montrezl Harrell dominate stretches, with the Warriors just not able to handle them in the screen-and-roll. If you watched the Clippers at all this season, you knew they always played hard, but their execution level at Oracle has been terrific.

Marc J. Spears, The Undefeated:The Clippers.This is one of the grittiest teams I've ever seen in 20 years covering the NBA. They believe in themselves even if the rest of the world does not. Doc Rivers may be doing the best coaching job he ever has, which is saying a lot.

Kevin Pelton, ESPN: The Clippers. Specifically, the ability of Williams and Harrell to be effective in the playoffs, something that's crucial for the Clippers with realistic expectations of a longer playoff run next season. Before this year, Williams had been as poor in the postseason relative to his regular-season performance as any current NBA player, while Harrell had played just 33 career playoff minutes. So their play has been pleasantly surprising.

Nick Friedell, ESPN:Clippers. They play hard all the time. As an Orlando native, this team reminds me so much of Doc Rivers' "Heart and Hustle" squad in his first season with the Magic. Like that team, this Clippers squad is made up of a bunch of players who are hell-bent on proving to the world that they could play. No matter what happens in Game 6, Rivers and his staff have done a great job building this team's culture and confidence.

Bobby Marks, ESPN:Clippers. That's not to say LA will win the series, but winning two games at Oracle is a feat that only the 2016 Cleveland Cavaliers have done since the championship run started in 2015. With cap flexibility this summer, the Clippers have used the Golden State series as their own recruiting pitch to potential free agents in July, including Kevin Durant.

2. Fact or fiction: The Warriors have a defense problem.

Pelton:More fact than fiction. Golden State's defensive rating is 11th so far among 16 playoff teams, and the Warriors have been unable to get key stops when necessary down the stretch in their Game 2 and Game 5 losses. Still, given we're talking about a five-game sample, I'd describe that more as a defense concern than a defense problem.

Friedell:Fiction: They have a focus problem. It has been the same old story all year for the Warriors. Some nights they have it rolling and some nights they don't. This group has built up their habits all season -- but they can still turn it on when they need it the most. They have too much pride and talent to think they're going to get carved up the same way in Game 6 that they did in Game 5.

Marks:Faction. The Warriors have a problem with their offense and defense. Yes, they need to get stops, but Golden State's offense has disappeared at the end of games. In the fourth quarter of the two losses to the Clippers, the Warriors shot 33.3 percent from the field and 18.2 percent from 3, averaging 5 turnovers and getting outscored by an average of eight points.

Spears:If you give up 71 points in a half, you definitely have a problem. I know Lou Williams is amazing and the Clippers have some offensive talent, but the Warriors are making the Clippers' offense look like the Warriors' offense.

Windhorst:Fiction. It depends on your definition of "problem." They ranked 10th in defense this season, the lowest in the Steve Kerr era. They have been about 6 points per 100 possessions worse in this series than during the season. But I think playing Andrew Bogut instead of DeMarcus Cousins will help them on defense over the long haul. Issues covering pick-and-roll have been worrisome, but I trust them long term.

3. Which Warriors player are you watching most closely going forward?

Spears: Draymond Green. If the Warriors are going to close out the series on Friday night, the defense will be key. And Draymond is the motivating leader to make sure that happens.

Marks:Andre Iguodala. We have seen a disappearing act from the former Finals MVP in the two losses, most notably in the fourth quarter of Game 5. In nine minutes played, Iguodala went 0-of-4 from the field with a team-worst plus-minus of minus-5, showing that those offensive woes have also transferred to the defensive side.

Friedell:Klay Thompson. He seemed the most frustrated of the group after the Game 5 loss, especially after publicly acknowledging after Game 4 that the Warriors were keeping up with what the Rockets were doing. The Warriors didn't seem like they overlooked the Clippers, but Thompson's comments didn't help the optics of another bad loss at home. He loves playing in Los Angeles, and he will rise to the occasion if he gets faced up defensively a little more against Lou Williams.

Pelton:Andrew Bogut, who has a minus-23 plus-minus over the past two games -- since the Clippers went to a smaller starting lineup with JaMychal Green at center. If Golden State continues struggling with Bogut defending stretch-5s, that really limits Kerr's options for filling center minutes with Cousins sidelined.

4. Fact or fiction: The Rockets are a better matchup for the Warriors now than they were last year.

Marks:Fact. We talked repeatedly about how the Rockets were going to take a step back this season with the losses of Trevor Ariza and Luc Mbah a Moute. But GM Daryl Morey kept maneuvering by signing Austin Rivers and Kenneth Faried for nothing to strengthen the bench. Combine those two players with Danuel House Jr., Gerald GreenandNene -- the Rockets' bench could be the X factor in the series.

Friedell:Fiction. While it seems like the Rockets found their rhythm down the stretch of the regular season, the absence of Ariza figures to hurt most in this upcoming series, at least on the defensive end. Obviously, a healthy Chris Paul makes a huge difference for the Rockets, but the defensive chemistry the group had last year doesn't appear to be the same heading into another potential showdown.

Spears:Hmm, that is a very good question. The Rockets of last year were better defensively. But James Harden is even more explosive than he was a year ago, and he also appears to be more confident.

Windhorst:Fact, if for no other reason than the Warriors have a smaller margin for error than they did last year. They're not the same team, but they're still the best team.

Pelton: Fiction. I think we're underrating last year's Houston team because we know they lost to Golden State, while this year's outcome remains uncertain. Yes, Harden has been better this season, but I think the Rockets' depth remains weaker despite Morey's efforts to upgrade over the course of the season. With Ariza gone, does Houston have a fifth player to finish games if Clint Capela can't be part of the closing five? Consider me skeptical.

5. Warriors vs. the field: Who are you taking to win the title?

Friedell:Warriors. After five long years of winning mixed in with the drama of the past couple of seasons, they are emotionally exhausted and vulnerable. They have their flaws -- but they still have more talent than anybody else, and they can play at a higher level than anyone in the field. They know the history at stake when they hit the floor, and they all understand, no matter what may happen this summer, that they may not get the chance to be together again with so much on the line.

Spears:Based on what I've seen so far, I think the Warriors themselves couldn't even debate taking the field until they prove otherwise.

Pelton:I'm still taking Golden State. I suspect the Warriors' issues in this series continue to have more to do with motivation than ability or chemistry. Will I be surprised if Golden State loses? Absolutely not. But when they're locked in, the Warriors have a gear they can reach that nobody else in the NBA has shown the ability to match on a consistent basis. So I still give them better than 50-50 odds of winning a third consecutive title.

Windhorst:Unless there's injury or untimely ejection/suspension (which is a real threat), it's hard to see a team beating the Warriors four out of seven. I know everyone talks about the Chris Paul injury from last year, etc., but the truth is they've lost one series in five years, and that one took a historic comeback.

Marks:Warriors, for two reasons. First: Despite a loaded field in the East, each team will face a grueling path just to reach the NBA Finals. Will the Milwaukee Bucks or Toronto Raptors team that we see this weekend be the same squad that the Warriors will face in late May? Second: Golden State has shown the ability to deal with adversity and win on the road consistently. 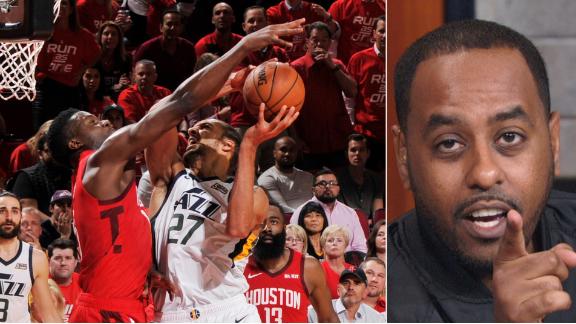 Rockets' defense is the biggest threat to the Warriors
Amin Elhassan explains that the Rockets' good team defense vs. the Jazz shows that they are a threat to upset the Warriors.
Report a correction or typo
Related topics:
sportsespngolden state warriorsla clippersnba
Copyright © 2020 ESPN Internet Ventures. All rights reserved.
More Videos
From CNN Newsource affiliates
TOP STORIES