5-on-5: Will Hawks, Warriors advance? 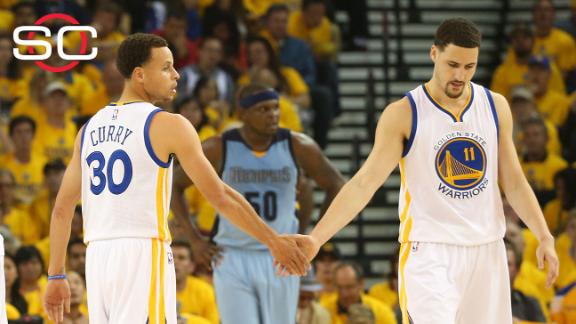 Will the Hawks and Warriors move into spots in the conference finals in a pair of Game 6s Friday night on ESPN? Or will the Wizards and/or Grizzlies force a Game 7? Our 5-on-5 crew breaks down those matchups and more.

1. Fact or Fiction: Al Horford is the NBA's most underrated star.


Kevin Arnovitz, ESPN.com: Faction. This is always a tricky exercise, ain't it? Let's call it the Elton Brand Effect after Horford's teammate who, in his prime, toiled in obscurity with the Clippers but was so respected for his all-around game that he was popularized across the land as Mr. Underrated. Horford has many Brand-like qualities: the work ethic, humility, intelligence and quiet competitiveness. But he must share the Most Underrated title with teammate Paul Millsap.

Kevin Pelton, ESPN Insider: Fiction. I guess that depends whether Mike Conley has gotten his due this postseason. Horford is certainly underrated, and certainly a star, but I don't know if I can say he's the most underrated of all.

Ethan Sherwood Strauss, ESPN.com:Fact. At the moment, I can't think of a better answer. The Atlanta big man can shoot, dribble, pass, defend and play either frontcourt position. Horford's good at many things, but no singular skill of his grabs the attention of casual fans. That, combined with playing 30 minutes a game for an oft-ignored franchise makes for a perfect storm of "underrated." Here's to Horford eventually becoming "rated."

Michael Wallace, ESPN.com:Fiction. Horford might not even be the most underrated star on his own team. That distinction could very well go to DeMarre Carroll, who has emerged as one of the best two-way players in the league. Horford's career rsum is solid. He is a legit All-Star when healthy and has guided the Hawks to the playoffs each season since he arrived.

Royce Young, ESPN.com:Fiction. Does Horford get enough credit for all the good stuff he does? Probably not. But "underrated" is such a relative thing because once people start calling you underrated, then suddenly you're overrated. Horford has that Tim Duncan vibe, playing in an unassuming way that's entirely focused on the team. It leads to being overlooked. But the most underrated? Hard to go that far.

2. Fact or Fiction: John Wall is a top-five point guard in the NBA.

Arnovitz: Fiction, and given the absurd depth at the position, there's no shame in falling just outside the top five. Steph Curry, Chris Paul and Russell Westbrook are locks until further notice, which places Wall in a scrum just below with Damian Lillard, Kyrie Irving, Mike Conley and, possibly, Jeff Teague, and the healthy versions of Tony Parker, Kyle Lowry and Derrick Rose. Wall's true shooting percentage of only 52.6 percent is below league average, which makes it tough to vault him into the top five.

Pelton: Fact. After the top three (Curry, Paul and Westbrook), it's mostly a matter of taste, and Wall's two-way play -- I picked him for my All-Defensive Second Team -- probably lifts him to the top of the crowded second tier at this point.

Strauss:Fact. This would be a more apparent fact if Wall played in an offensive system that made sense. He's already the best defensive player at his position, in my opinion. Once he's in a structure that encourages the shooting of 3-pointers in the regular season, Wall's star will rise.

Wallace:Fact. He has elevated himself this season into the elite group that consists of Curry, Paul, Westbrook and Parker. Sure, there may be debates as to whether you'd take Wall over Lillard, Conley or perhaps a healthy Rose. But Wall's work the past two seasons as a scorer and facilitator speaks for itself.

Young:Fact. You're probably trying to count off five better in your head right now. Let's see, Curry, Westbrook, Paul and ... maybe Conley? Maybe Lillard? Maybe Irving, if you're still counting him as a point guard for some reason? Wall is an unreal facilitator who blends size and power, and he has taken big steps with his jumper. Hard to think of five who are undoubtedly better.

3. Fact or Fiction: The Warriors are too reliant on the 3-point shot.

Arnovitz: Fiction. The 3-point shot is no more a gimmick than a layup or, for that matter, a foul shot. If anything, the Warriors are exploiting one of the last true inefficiencies in the game by capitalizing on the juicy 150 percent return for a shot that's not much more difficult than the equivalent heave inside the arc. This is one reason they led the league in offensive efficiency and, even with their struggles in the playoffs, still rank No. 4 in the postseason.

Pelton: Fiction. After 67 wins, I'm not sure why the Warriors should change anything. But this specific criticism ignores the strength of their defense. Golden State is 8-3 this season when shooting worse than 27 percent from 3-point range. The Warriorsdon't necessarily need to shoot well to win.

Strauss:Fiction. If they were drawing tons of fouls, they'd be too reliant on free throws, which refs might not call in the playoffs. So which is it? It seems like there's a big overlap between those saying the Rockets can't rely on free throws and those saying the Warriors can't depend on jump shots. Golden State doesn't have a perfect offense, but it was ranked second this season, largely thanks to shots that count for 50 percent more than 2-pointers. That's a "reliance" on a powerful weapon.

Wallace:Fact. And that's OK. When you're capable of shooting 30 triples a game and knocking down nearly half of them, you certainly won't lose many games. Golden State has made the 3-pointer a staple of its offense, whether the shots are contested or not. The Warriors make it a point to have at least four players on the court at all times who can knock down that shot. And if defenders overplay the 3-point line, there's a resident MVP who is more than willing to carve you up other ways.

Young:Fiction. Here's the annoying thing about the "live by the 3, die by the 3" cliche: If something is your identity and you don't do it well, you're going to die by it. For the Grizzlies, you could say, "live by defense, die by defense." And right now, they're dying by defense because they can't guard Golden State anymore. The Warriors are at their highest electricity level when pouring in 3s. And for a lot of them, it's an easier shot than some contested post-up.

4. Fact or Fiction: The Hawks will close out the Wizards in Game 6.

Arnovitz: Fact, though I say this with no real confidence because the Hawks seem incapable of pairing a standout offensive performance with a defensive one and can't seem to sustain their rhythm for longer than 10 minutes at a time. But they performed too well for too long in the regular season to remain this raggedy. These aren't habits that are unlearned or skills that get lost. Eventually, it will come for the Hawks, and Game 6 is as good a time as any.

Pelton: Fiction. If the Hawks execute offensively, they're certainly capable of winning in Washington, but given how well the Wizards played at home without Wall in Games 3 and 4, I like their chances to win with him in the lineup.

Strauss:Fiction. How can we trust the Hawks at this point? That's a highly subjective argument but one that resonates with me. They haven't looked like themselves all postseason and came within an offensive rebound of losing at home. I'm siding with the Wizards and home court.

Wallace:Fiction. Washington is one failed boxout from being up 3-2. I like the Wizards' chances to hold the fort at home, considering Wall's injured wrist apparently held up fine in Game 5 and Paul Pierce's ego is impossible to deflate this time of the season. He'll bounce back from that reported premature "series" comment after putting the Wizards ahead in the final seconds of Game 5, only to see Horford counter with an "excuse me?" putback at the buzzer.

Young:Fiction. Seems like this one has seven written all over it. But so much will center on the Wizards' mental state. They had Game 6 in hand, and then Horford took it away. Pierce has been through plenty of this stuff and should have that locker room ready to go.

5. Fact or Fiction: The Warriors will close out the Griz in Game 6.

Arnovitz: Fact. Order has been restored, and outliers have regressed to the mean. I love the Griz and have a deep appreciation for their Jurassic style, but they don't have enough stretch on the floor to compete offensively. Scoring is simply too much work against a Warriors team that, lest we forget, led the league in defensive efficiency this season. And Tony Allen, the Grizzlies' best neutralizer, is gimpy. It's just too much to overcome.

Pelton: Fact. When the Warriors play their game, they're capable of reaching a level Memphis simply can't match. The Grizzlies will also have to figure out how to adjust to Golden State's defense sagging off Allen, who says he's "definitely" playing despite a hamstring injury.

Strauss:Fact. Perhaps this is the night an unguarded Allen drains a few 3s and frees the Grizzlies from a lack of space. I'm betting it won't go that way, but stranger things have happened. Memphis is a prideful team, and an easy closeout is far from assured. I'm just guessing the Grizzlies are outmanned and outmaneuvered at this juncture.

Wallace:Fact. I'm a believer in "grit and grind," "heart and hustle" and all of those other emotional intangibles that define the Grizzlies. But there comes a point when the body just gives out and can't sustain the effort and energy required to endure a seven-game series against the younger and more talented Warriors. Injuries or limitations affecting Conley and Allen have compromised Memphis' perimeter defense. Could the Grizzlies still make one last stand at home? Sure. But can that be expected after consecutive blowout losses? Probably not.

Young:Fact. At some point in almost every series, the better team reveals itself. That seemed to happen in Game 5. Game 4 was the Warriors' "moment of truth," and they answered the call. But Game 5 was about re-establishing control, and the Warriors did that and then some. They appear to be the better team with better players.

Keys to Warriors clinching in Game 6
ESPN senior NBA writer Marc Stein discusses what the Warriors need to do to top the Grizzlies in Memphis and clinch a spot in the Western Conference finals.